Blog - Latest News
You are here: Home1 / Homepage2 / “Networked for the Common Good”

Recently ISN hosted a table at the inaugural Loyola Club event in Pittsburgh, Pennsylvania. The “Loyola Club” is a lay-driven effort of Jesuit high school and university alumni in Cleveland, Ohio that began a few years ago. The idea is simple: a few times a year, host a lunchtime speaker who can address the values of Ignatian spirituality in the context of some realm of daily life (work, family, etc.), and do it in a central location that makes all who attend feel welcome. Since its inception in Cleveland, the club has successfully sold out over fifteen tables each event and developed seed money to see the idea sprout in other parts of the country like Pittsburgh.

If you are going to focus on leadership, as Pittsburgh did for their for the inaugural Loyola Club presentation, there is no better kick-off keynote than Chris Lowney. A former Jesuit seminarian and investment banker for J.P. Morgan Chase, Lowney is now a renowned author and speaker. He contextualizes his unique life experiences in a number of books including “Heroic Leadership,” which describes the best practices of a 450-year old-old company–the Jesuits.

During his talk, Lowney emphasized three key core elements of St. Ignatius of Loyola’s leadership of the Jesuits which continue to be present in their charism and approach to the world today: ingenuity, love, and heroism.  He provided tangible examples of how these values were lived out through the Jesuits’ history and how Lowney was challenged to live them out during his time in the corporate world.

His speech continued with an astute analysis of untapped potential existing within the Jesuit and Ignatian networks across the United States. He shared a few anecdotes that illustrate the underutilized connectivity of those who have been inspired by the spirituality of St. Ignatius of Loyola via Jesuits and lay partners. One story cited a major corporation CEO addressing administrators from Jesuit institutions. The CEO thanked the administrators for the 300+ individuals employed at his company with Jesuit educations.  Lowney joked that given an entire day, the group might have been challenged to come up with a statistic that likely took the CEO a few minutes to collect from an HR database. His lighthearted point – we don’t even know the potential of our network.

There are currently 1.6 million living Jesuit university and college alumni in the United States. This number does not include high school alumni, current and former Jesuit and Ignatian volunteer corps members, or Jesuit parish members. It is astounding to think about how much good this significant mass of people are already doing. But I wonder: what could be accomplished if they were even better networked to collectively work for the common good in our own country and beyond?

This year over 1,000 people inspired by St. Ignatius will gather at the Ignatian Family Teach-In for Justice in Washington, DC. For fifteen years the teach-in has been a space to commemorate the lives of the Jesuits and their companions murdered in El Salvador in 1989. These martyrs were killed for their commitment to the economically poor grounded in their Christian faith. The teach-in is just one example of how we can utilize the potential of our Ignatian-Jesuit heritage to be people of faith where justice is imperative, as the Jesuits challenged themselves (GC 32, 1975). However, there many more ways that we can animate this network. What are your ideas? 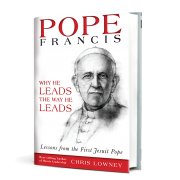 PODCAST: Chris Lowney on “Pope Francis: Why He Leads the Way He Leads”
2 replies