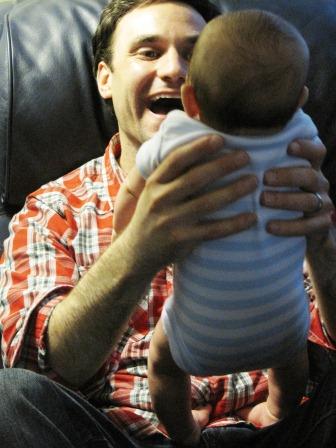 New Year’s Resolutions don’t work.  At least they don’t work for me.  2002: Get in Shape.  1999: Learn a New Language.  How did those work out for me?  Well, let’s just move on.  So I haven’t made them in about a decade because I used to find that I would forget about them by mid-to-late January.  By that time each year something else had grabbed my attention and that capital “R” Resolution had slowly faded into the din of my life.  For instance, last year at this time, I would have never been successful with a New Year’s Resolution.  With our first child due in February of 2012, I had no idea what was in store for me.  Predictably, the first year of my son’s life has proven to be nothing but constant change, a year in which a Resolution would have been laughable 12 months later.  No month is the same with Andrew.  The dynamics of our family life evolve from week to week as he grows, changes, and develops new needs and wants.  One week he sleeps well, the next he doesn’t.  One month he is just nursing, the next he is eating solid food, and now he’s feeding himself Cheerios.  Each month brings new teeth.  One month he is rolling over, the next he is crawling, and the month after that he is nearly walking.  Constant.  Change.  We can barely keep up at times.  So instead of setting goals for myself that will ultimately seem irrelevant in a world of constant change, I’m going in a different direction, a direction inspired by this experience of observing my son’s development.

All of you parents out there (that are more seasoned than I am) know this well.  It is fascinating to watch a child build up towards walking.  The process is gradual, each day as important as the next in the progression:  rolling over, then crawling, then pulling himself up to stand with his puffy baby hands, then shuffling his cubby feet as he holds onto furniture for balance, then standing on his own without assistance with a grin on his face, then …

And that is where we are now.  He is so close.  Soon Andrew will take that step on his own, he will trust his own sense of balance, and off he’ll go.  He is so close.  But he needed every day and each of the learned movements up until now in order to get to this point.  All he has to do is take the next step.  And then he will take two steps.  And then he will run.  And then his feet will take him places I can only imagine.  But he won’t get to any of those places without taking that first step.

So it is for me, I think.  God isn’t calling me to be a perfect parent, the mistake-less employee, the impeccable husband.  God is just calling me to take the next little step in front of me.  That next step for me isn’t easily articulated in a New Year’s Resolution because my world is in constant change.  So instead of a Resolution for 2013, I hope to simply listen.  To pay attention to the smaller moments of life to hear my next little baby step.  To practice the kingdom of God a little each day in light of what I have heard.  I hope not so much to run right now, than to take a deep breath and step tentatively out into an unknown year with courage and with faith and with openness to all the ways I might change and grow over the next 12 months, just like Andrew.

As the calendar changes to 2013, I wonder:  What is your next little baby step?  What do you hear?  What is God’s subtle invitation for you that might be wrapped up in the details of daily life?  Forget making a Resolution for the entirety of 2013.  What is one small step you can take today that would bring peace and love to your friends, or your children, or your partner, or yourself?  How might you, in the words of Pierre Teilhard de Chardin, S.J., trust in the slow work of God?

Giving and Receiving During Christmastime