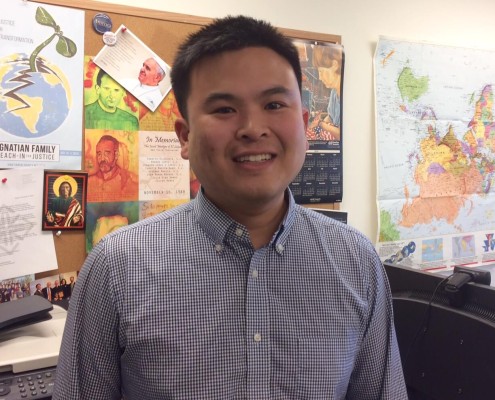 The Ignatian Solidarity Network welcomes Nicholas Liao as its first Director of Communications and Development.  Nick comes with more than five years of experience in religion media, including stints in book publishing and broadcast news. Most recently, he was Associate Religion News Producer for the award-winning PBS show Religion & Ethics NewsWeekly in Washington, D.C.

Liao holds an M.Div. from Duke Divinity School, where he was involved with the Duke Center for Reconciliation, helping to resource clergy and grassroots leaders engaged in social justice work throughout the U.S. He also has an undergraduate degree in business from the University of Texas at Austin. His writing has appeared in U.S. Catholic, Faith & Leadership, DIVINITY, and SUCCESS.

“Nick brings a strong background in communications and media,” said Christopher Kerr, ISN executive director. “His background in faith-based publishing and media production will be a tremendous asset to our faith-based social justice mission.”