Blog - Latest News
You are here: Home1 / Solidarity Stories2 / You want me to teach you?: Lessons of Faith and Justice in East LA 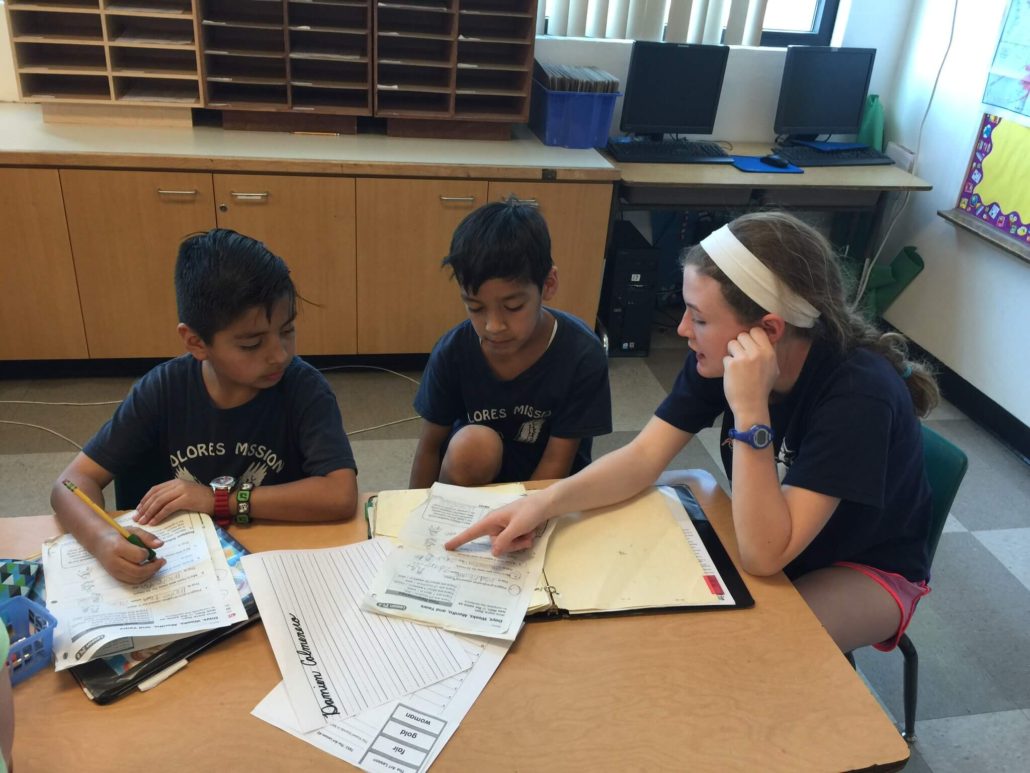 “You want me to teach you?” said Anthony as I asked him to show me how to make origami in his fourth-grade classroom. Just after school let out, while many of my peers started vacationing, ten other classmates from Saint Ignatius College Prep and I traveled across the country to East Los Angeles to spend a week living among the community of Boyle Heights. While we weren’t sure what to expect, we were both nervous and excited as we began our week at Dolores Mission.

When Anthony posed this question, I responded with an enthusiastic “Yes!!” He immediately gained a new type of energy as he told me all the different items he could make. Anthony taught me step by step how to make origami saying, “Okay here comes the hard part,” and, “Okay, we are almost done.” By the end, I had turned a flimsy piece of paper into a small and sturdy box. This moment stuck with me not because I learned how to make origami, but because I gained a little more insight into the term “kinship.” In preparation for our trip, our group read Tattoos on the Heart, by Fr. Greg Boyle, S.J., which introduced me to this odd-sounding synonym for friendship. Anthony, and the many others that I met at Dolores Mission, showed me the depths of what kinship­­true solidarity­­ can be.

Anthony, as a student who struggles in school, is used to being told what to do and how to do it. So when I asked Anthony to teach me, he was very surprised. This small interaction with a fourth-grade boy may seem like nothing, but it became the central event of a common theme I was able to experience throughout my week at Dolores Mission.

Upon arriving, we were immediately immersed into the community through Father Isidro’s birthday party. At the beginning, my peers and I awkwardly mingled around with each other as we observed the scene. Kids ran around, families sat and talked, parishioners prepared the meal, and a large group of men just sat on the steps. As the night rolled on and the stars came out, so did the music. Before we realized, everyone was on the dance floor giving it all they got. The night was filled with new friends, laughter, and silly dance moves. By the time we had to leave, I was sweaty, tired, and had completely forgotten that we had just met the people two hours ago. After the party, our group sat and reflected with a priest of the parish, Fr. Mike. It was at this time that he began to talk about the large group of men sitting on the steps at the party. These forty men were members of the Guadalupano Homeless Project. This project welcomes a large group of homeless men into the community for an extended period of time. At Dolores Mission, they are allowed to sleep in the church, and are welcomed into the community with open arms. After hearing this and looking back at the night, I was amazed to see the grace of the people at the birthday party. Each parishioner allowed all the homeless men to be served first. Each man was greeted with dignity, given food, and treated as part of the community. When we first arrived, my peers and I were hesitant to be thrown into the community so suddenly. All of us were worried about the Blackhawks Stanley Cup game and did not know how to interact with the people at the party. However, Father Isidro’s birthday party became a highlight of the trip and showcases Dolores’ ability to share the eucharist, in a broad sense, through their faith­based community.

A large part of our trip was based around Father Boyle, the former pastor at Dolores Mission and the founder of Homeboy Industries, an organization that is considered the biggest rehab center for gang members in the country. Homeboy offers a vibrant and positive atmosphere through a safe community of therapy, job training, and people to talk to. I recently watched a TED Talk by Father Boyle in which he said, “How can we achieve a certain kind of compassion that stands in awe at what the poor have to carry rather than stand in judgement at how they carry it, for the measure of our compassion lies not in our service of those on the margins but in our willingness to see ourselves in kinship in them, and mutuality.” It is through Homeboy Industries that Father Boyle has been able to foster this mentality that he asks everyone to strive for. His compassion and kinship that he shared for each and every person of the community was truly astounding, and was something that I held close to my heart throughout the trip. 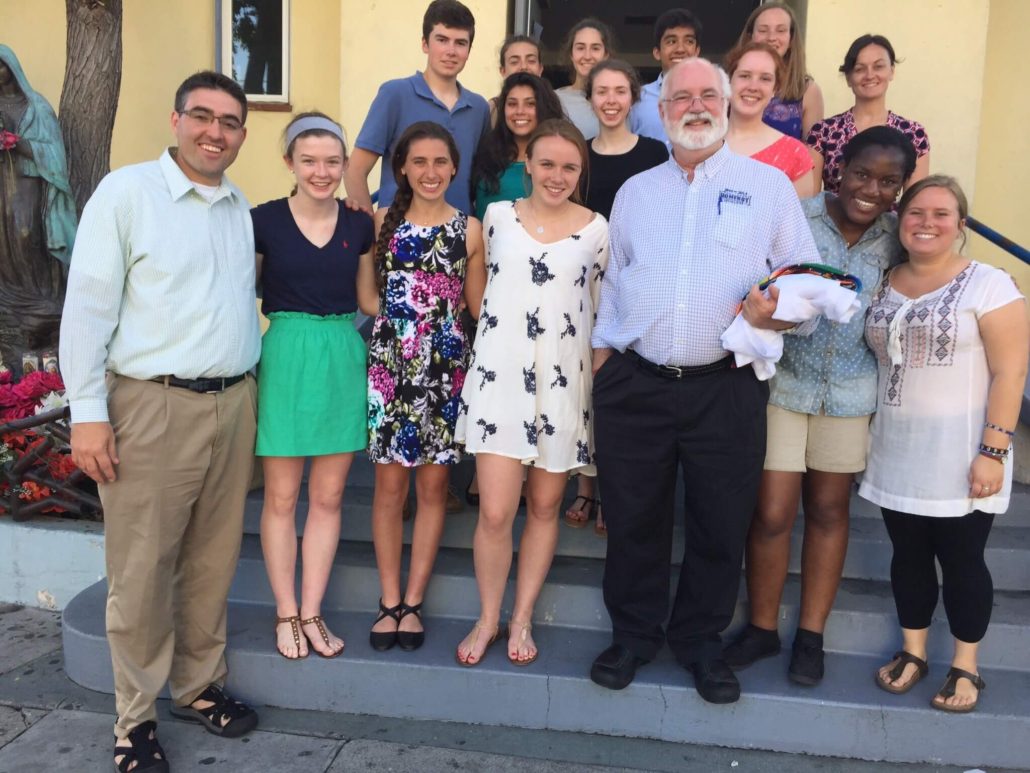 Every Wednesday, Father Boyle comes back to Dolores Mission to say mass with the community, and we had the blessing to attend. Before arriving, I had imagined a crowded mass with packed pews and minimal standing room. However, when we arrived, there were two other families and a mentally disabled man. As Father Greg was saying the Eucharistic Prayer, the man walked up to the altar. He kept trying to flip past the page Father was reading and interrupting the prayer. Instead of dismissing his actions and escorting him back to his seat, Father Greg embraced the man in a hug and allowed him to stay with him as he continued the mass. If anything showed the strength of the community and the work of Father Greg, it was this moment. Since Homeboy Industries and his own book, Father Greg has become a very busy man. It would not be uncommon for someone like him to drop the Wednesday mass altogether, considering he has a tight schedule and hardly anyone shows up. However, Father Greg embodies the work of Christ and the nature of kinship through continuing to say mass and embracing all those who are with him.

Toward the end of the week, we had the opportunity to walk the streets of Skid Row, a pocket of Los Angeles that inhabits one of the largest populations of homeless people in the United States. Our tour guide Kevin, a recovered alcoholic and drug addict, walked us through the heart of it all and hid nothing from us. The fourteen of us navigated the streets in silence, as we witnessed people wandering throughout their makeshift homes lining the sidewalk. When we arrived back at Dolores Mission that night we reflected on our day, and the horrors of Skid Row came alive. It was hard to forget about the severe lack of hope and the absence of any type of community. Comparing Skid Row to Homeboy Industries was hard. Homeboy was filled with new energy, as people were just discovering a new path of life. However, the people of Skid Row were segregated into their own pocket of town and completely forgotten by the rest of the city.

Come and See: Leave With Questions

Throughout the trip, we turn to the Gospels to find insight and inspiration. One passage, from the Gospel of John (1:37­39), struck me:

“Turning around, Jesus saw them following and said to them, ‘What are you seeking?’ They said, ‘Rabbi, where are you staying?’ He said to them, ‘Come and you will see.’ So they went and saw where he was staying, and they spent that day with him.” Encountering Jesus in this way led the two disciples to tell others, telling them to “come and see” Jesus in a way that they did not expect. This summer, the Dolores Mission community was calling my classmates and me to “come and see.” When the disciples came and saw, they left knowing that Jesus was the Messiah. I left Dolores not with a set of clear answers, rather an overflow of questions: “Why is it okay for our society to leave people in abject poverty? Why is Father Boyle’s work an exception, and not the standard? How can I begin to use my experience at Dolores in my life as I think about college and my career?”

It is easy to become overwhelmed by the issues present in East LA, which can often lead to feelings of despair. I understand that I don’t have all the answers, but my experience in Boyle Heights has led me to ask better questions, and become a person committed to building kinship and community. When I think back to that first week of my summer, Anthony’s words echo in my mind: “You want me to teach you?” I will always remember the kinship I felt with Anthony and others at Dolores Mission. 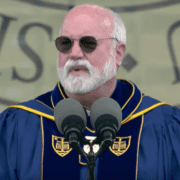 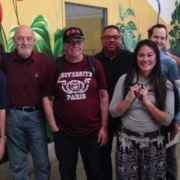 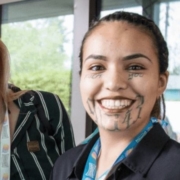 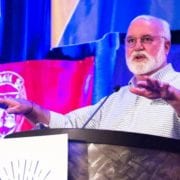 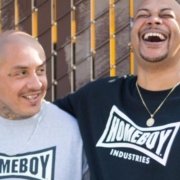