Dumisani and Drew in front of the Nelson Mandela Foundation on June 28, 2016

Dumisani is a strong man. He is strong not just because he practices bodybuilding as a sport but also because he possesses a strength of character well beyond his age.

We first met Dumisani in 2014 after participating in an immersion trip to South Africa through our former high school, Bellarmine College Preparatory. While spending a week at St. Martin de Porres Parish and School during our trip, we were asked to pick up trash and pull some weeds at a local field with some students from St. Martin. During this time, we met Dumisani, who was the first to approach us and introduce himself. Throughout our day of work, we got to know Dumisani quite well and were amazed at how we shared many outlooks on life. As Dumisani tirelessly pushed around a wheelbarrow in a dress shirt and tie while we all cleaned the dry field, we began to share stories of our own life and reflect upon the lessons we have learned.

After arriving home from our trip in 2014, the first notification present on our Facebook accounts was a friend request from Dumisani, directly followed by a message from him right after we accepted the request. This was the beginning of two years full of conversation on Facebook and WhatsApp. Just as he carried around the wheelbarrow that hot, dry morning in Soweto, Dumisani continued to help us carry our troubles and difficulties in life through listening to our stories. He always made an effort to reach out to us, and pictures and posts soon flooded each other’s Facebook timelines. 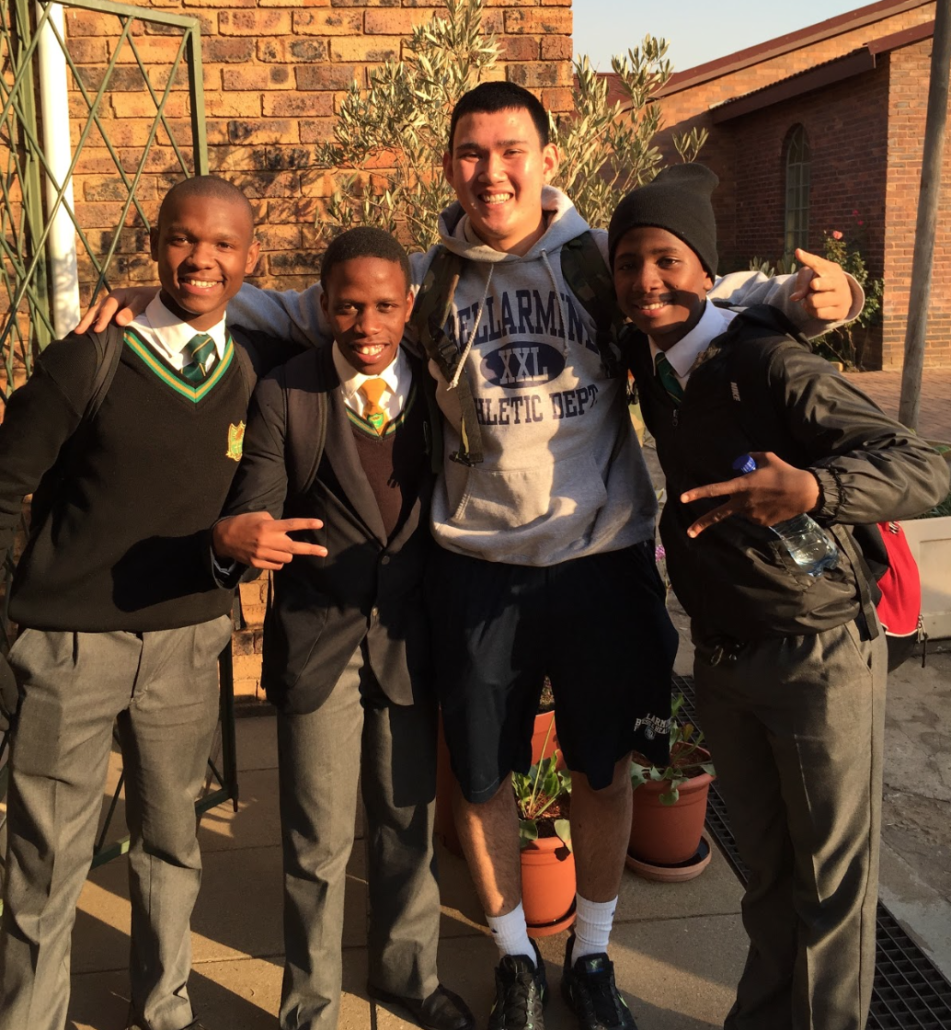 This contact continued on into 2015, especially when Michael returned to South Africa through another Bellarmine immersion trip. After a 24-hour flight and 2-hour drive to St. Martin de Porres, Dumisani was there to greet the new Bellarmine group at the front gates of the school. After completing his day of school, he waited for 3 hours just to welcome his new friends to Soweto.

Now that we are back in Soweto, it has been an honor and a joy to spend time with Dumisani. With our extended stay in Soweto, Dumisani has shown us around town, introduced us to local foods, and even helped us navigate the tricky Johannesburg public transportation system. During a day where we simply planned to hang out and catch up, Dumisani took us around the neighborhood he lives in. After walking down the streets of his neighborhood, he took us inside his house, where we met his grandfather, his father, and his siblings. He then took us to the site where his mother works. One of the more powerful trips was seeing the room that he and his mother lived in together, sharing a special bond for several years in the midst of a difficult upbringing. This room—a rented home in the midst of a larger house—has been converted into a playroom for toddlers, as the home itself is now a daycare center for children. Dumisani’s grandmother now works at the daycare center, mentoring young children in the same place where Dumisani grew up and grew so close to his mother. As we walked around the house and the yard, children were jumping all around and singing songs—a fitting atmosphere for a place that holds so many memories for our close friend.

This past week we got to meet up with Dumisani at his former high school, St. Martin. We sat down at the same location where we first met and decided to record our conversation. After asking him about a story of a challenging time in his life, Dumisani said this.

On Father’s Day a few weeks ago, Fr. Bruce, SJ asked the St. Martin parish to reflect on the potential difference between fathers and sperm donors.  What does it mean to be a father?  Do current gender expectations in parenting demand too much from a male father-figure?  Too much from a female mother-figure?  Dumisani’s story made us think about the weight of responsibility.

When his father returned, Dumisani’s mother asked Dumisani to forgive his father in words from the parable of The Prodigal Son.  In this case, however, Dumisani had to assume the role of the father, pretending to be the forgiving adult.  This ask, this inversion of traditional responsibility, could have been permanently damaging, too much to ask a 10th grader.

But Duminsani responded with forgiveness, a choice that would shape the young man we know today.  His choice was not only impressive in its own right, but also made me wonder if we do a disservice to our young people by delaying responsibility.  We hope that no other child would ever have to make this kind of decision, but we also know this kind of conflict is not uncommon in our world today.  Is there anything to be gained for our young people by acknowledging these issues before college and university?  Dumisani’s character makes us wonder if there is something powerful to gain by asking our friends, our peers, our children to step up and address the issues in our world.  What is the right amount of responsibility for our young people to feel both supported and motivated to become leaders today rather than leaders tomorrow?

Continuing to dive deeper into this theme, we asked Dumisani about the scariest moment of his life. This is what he said.

The Force of Fear

While looking for a taxi near the bridge where Dumisani was mugged, we took out a few rand to pay a taxi worker.  Dumisani glanced around and we paid quickly as Dumisani hurried us away.  Turns out some of the local thieves had seen us and started to move in.  As we walked away, I started looking at those around me differently.  Could that be one of the thieves Dumisani had seen?  Why were we here?  No one else looks like me.  I was afraid.

“This [fear] was it—the unforeseen force that obliterated reason in South Africa; the force that held the white tribe together, and kept our sweating white fists locked in a death grip on the levers of power,” writes journalist and author Rian Malan in his novel, My Traitor’s Heart.

Malan writes about his experience as a white South African in the violent years of apartheid, trying to understand how one might live and love at the dangerous margins of society.

Dumisani’s story and the many comments we have received about the danger of Johannesburg, and particularly Soweto, has invited us to ask similar questions.  Malan reflects that:

“As a tribe, a nation, we are all immured inside a fortress of racial paranoia…getting deeper and deeper into a race war we cannot possibly win.…There is no military solution because the enemy is within…we cannot defeat such an enemy without destroying ourselves.…We must find a way of trusting, but who is there to trust?”

Walking through Soweto and Johannesburg, thinking about the United States of America and the many many other places all over the world struggling with violence and hatred far beyond our comprehension, we echoed Rian Malan’s basic question:  “How do we live in this strange place?”

This was a key motivation for our return to Soweto, and though we have not found the answer yet, we would like to offer Malan’s final story.

In 1986, he traveled to Msinga in KwaZulu Natal to meet Creina Alcock who had lived with the Zulu people with her husband and sons for the majority of her life.  Despite the family’s intentions to work with the Zulu people and help heal the arid land, her husband Neil had been killed in a tribal skirmish and her adopted sons had all stolen large amounts of money from the community.  As a white woman feeling alone in the poverty stricken landscape of Msinga, she found herself asking the same question, “How do we live in this strange place?”

Her answer to Malan was this:

“‘I…looked out the door, and I was suddenly terribly afraid…I felt utterly betrayed by loving.  All the things I had ever been told about love just weren’t true.  It was all full of false promises.  I understood that love was a safety and a protection, and that if you loved you would be rewarded by someone loving you back, or at least not wanting to damage you.  But it wasn’t true, any of it. I knew that if I stayed, this was how it was going to be: It would never get any better; it would stay the same, or get worse.  I thought, If you’re going to live in Africa, you have to to be able to look at it and say, ‘This is the way of love, down this road: Look at it hard.  This is where it is going to lead you….’ I think you will know what I mean if I tell you love is worth nothing until it has been tested by its own defeat.  I felt I was being asked to try to love enough not to be afraid of the consequences.  I realized that love, even if it ends in defeat, gives you a kind of honor; but without love, you have no honor at all.  I think that is what I misunderstood all my life.  Love is to enable you to transcend defeat.”

“You said once one/you could be deformed by this country, and yet it seems to me one can only be deformed by the things one does to oneself.  It’s not the outside things that deform you, it’s the choices you make.  To live anywhere in the world, you must know how to live in Africa.  The only thing you can do is love, because it is the only thing that leaves light inside you, instead of the total, obliterating darkness.”

A graphic design piece that Michael made for Dumisani, featuring a quotation from Dumisani. 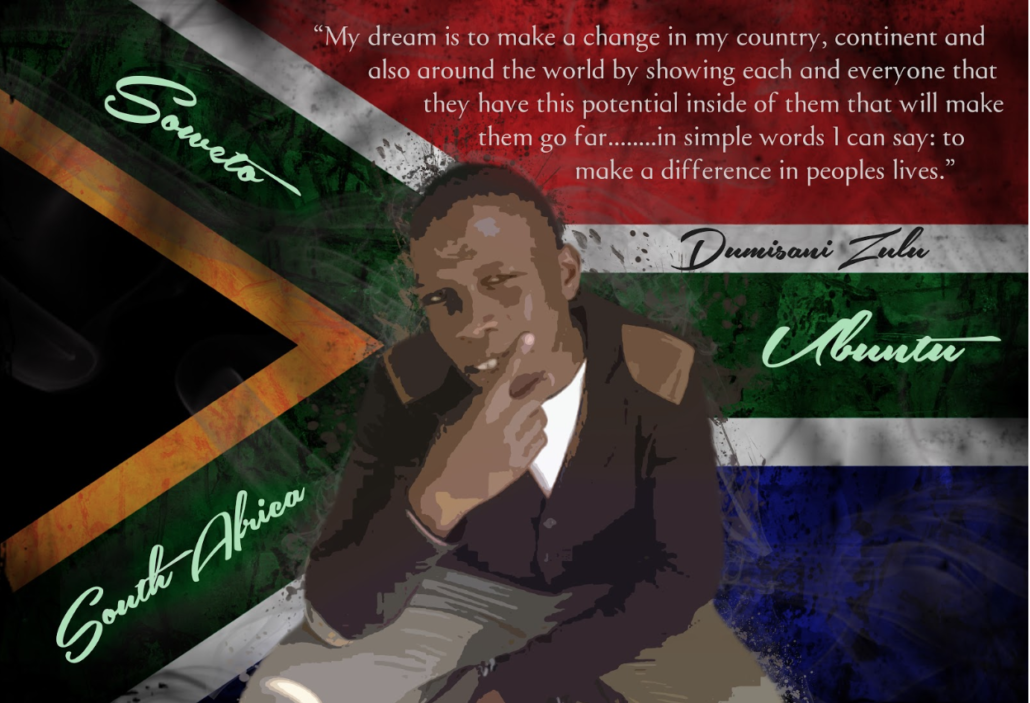 From Cleveland: Let Go Of Your Stereotypes