Blog - Latest News
You are here: Home1 / Voices for Justice2 / Creativity in Response to Climate Change: Jesuit Center for Ecology and...

BY TESSA PULASKI | March 22, 2017
Note: The Jesuit Center for Ecology and Development (JCED) in Lilongwe, Malawi works to promote sustainable human development. Through the coming weeks, Tessa Pulaski, a JCED intern, will be sharing stories of JCED’s work and the communities JCED serves, sharing with the Ignatian network the work of an organization that is answering our faith’s call to serve both the environment and marginalized communities.

Recently, when asked about his views on the role of carbon dioxide  contributing to climate change, Scott Pruitt, the new administrator of our highest office dedicated to protecting the environment, cast doubt on the existing scientific consensus, saying, “I would not agree that it’s a primary contributor to the global warming that we see.” He went on to argue that, “we need to continue the debate and continue the review and the analysis.”

In Malawi, climate change is no longer an intangible, politically disputed concept, but rather, a lived phenomenon adversely affecting the most vulnerable. The recent drought related to El Niño, the worst the region has seen in thirty years, has exposed the vulnerability of Malawi, and other Southern African nations, to the long-term effects of climate change. While El Niño is a natural weather phenomenon, recent studies show that human-induced climate change has exacerbated El Niño’s intensity, leading to reduced rainfall and drought in parts of Southern Africa. 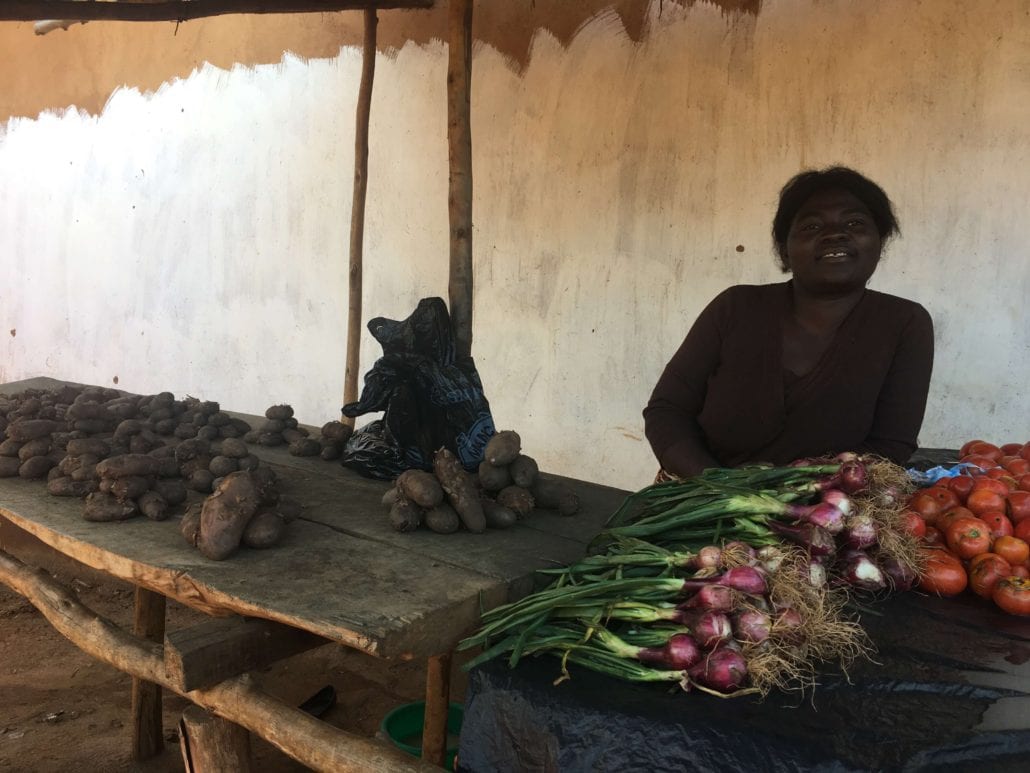 In Malawi, a Jesuit Center for Ecology and Development (JCED) project beneficiary with her vegetable business.

Furthermore, poverty-related environmental degradation and climate change are directly related. Drought puts further pressure on farmers to engage in banned, environmentally harmful, income-generating activities, such as charcoal burning and deforestation.  Energy in Malawi primarily comes from hydropower, so drought also leads to increased power outages, and thus a greater demand for charcoal. The pervasive feedback loop between the adverse effects of climate change and poverty-related environmental degradation represents a growing threat to farmers.

In “Laudato Si,” Pope Francis echoes this reality, exclaiming, “many intensive forms of environmental exploitation and degradation not only exhaust the resources which provide local communities with their livelihood, but also undo the social structures which, for a long time, shaped cultural identity and their sense of the meaning of life and community.”  To confront climate change and environmental degradation means to preserve community’s relationships to the earth and to one another. 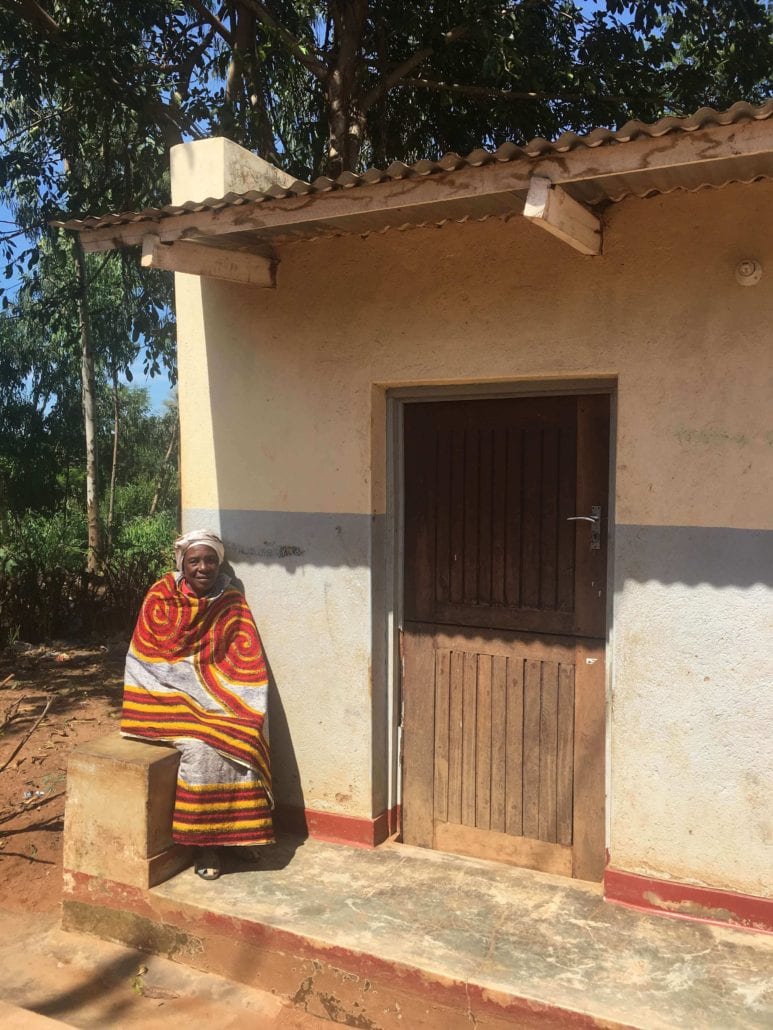 A woman outside of her son’s barber shop in Likuni. The business was a recipient of a JCED loan.

The Jesuit Center for Ecology and Development (JCED), the only Jesuit development organization that works on ecological issues in Africa, was founded in the aftermath of General Congregation 35, an international meeting of the Jesuits, which articulated addressing environmental and ecological issues as a part of the Society of Jesus’ mission. JCED envisions a society where local communities promote environmental integrity and vulnerable and marginalized households and disadvantaged communities have decent livelihoods.

My co-worker at JCED, Linda Chiumia, shared with me her insights on the simultaneous effects of climate change and environmental degradation on Malawi, saying “because of poverty, people in Malawi depend on firewood for energy, which has contributed to heavy deforestation in many areas, which is also contributing to the many effects of climate change.  Unfortunately, very few can replace the trees that have been cut down and that’s what makes the situation more dangerous– we only cut down, we don’t replace.  JCED has taken initiative to produce energy-saving cookstoves to reduce deforestation.” 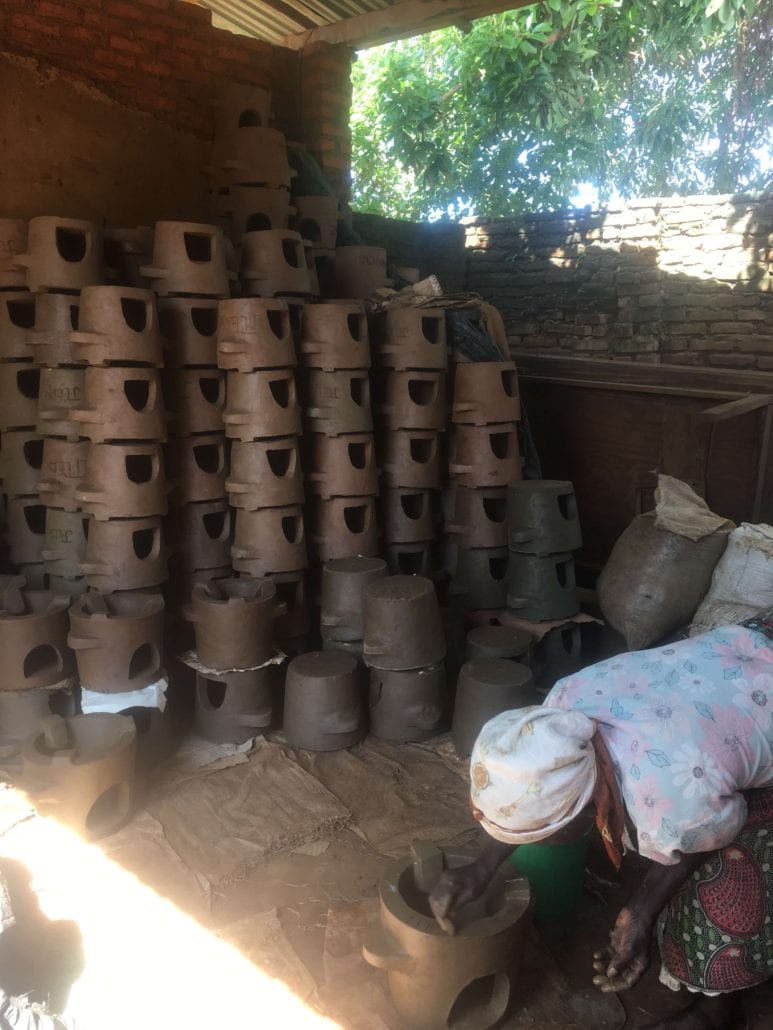 JCED has three primary programs that work on organic and permaculture vegetable production, food security and clean cookstove production.  Linda runs the clean cookstove production and Village Savings and Loan (VSL) programs in Likuni.  JCED directly purchases clean cookstoves produced by members of the community, which they utilize in our programming, and also provides small loans to the members of the production group so they can start their own small businesses. This allows the community members to grow resiliency to the effects of climate change and environmental degradation, since they are no longer exclusively dependent on rain-fed agriculture.  This week, Linda and I went to Likuni and met with some of the women and men who are creatively responding to the impacts of climate change, through producing clean cookstoves and running a barbershop, carpentry business and a vegetable business.

As members of the Jesuit community in the United States, we are called to share the human face of climate change, and compassionately dialogue with those who continue to deny our role in global warming.  It is only through conversion as faith, local, national, and global communities, that we will be able to overcome the enormous threats and challenges posed by climate change.

Tessa Pulaski is currently serving as an intern at the Jesuit Center for Ecology and Development in Lilongwe, Malawi. She graduated from Georgetown University’s School of Foreign Service in 2015, where she studied Science, Technology and International Affairs. twitter: @tessapulaski 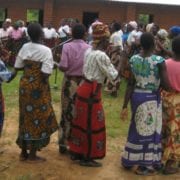 Day 23: Tend and Till the Earth
Scroll to top
Shares
Share This