Blog - Latest News
You are here: Home1 / Voices for Justice2 / Jesuit Parishes Gather for Bread for the World Lobby Day

Early on the morning of June 13, 2017, Kate Tromble and Kittie Fitzgerald arrived at St. Mark’s Episcopal Church on Capitol Hill in Washington, D.C., for a legislative briefing, prayer, and breakfast with delegations preparing for the Bread for the World Lobby Day.

Fr. Ed Quinnan, S.J., provincial assistant for pastoral ministries for the Maryland and U.S. Northeast Jesuit Provinces, had been working since early spring to rally support for the Bread lobby day amongst east coast Jesuit parishes. The morning of June 13 was a culmination of significant province-wide and parish preparation.

Tromble, pastoral associate for social justice at the Jesuit Holy Trinity Catholic Church, and Fitzgerald, parish member and co-chair for the St. Jean-Baptiste (Haiti) committee at the parish, joined members of six other Jesuit parishes at the lobby day. After witnessing the wake of 2016’s Hurricane Matthew in Haiti and Holy Trinity’s sister parish, the two were eager to translate their experience into both international and domestic advocacy to end hunger and support the vulnerable. 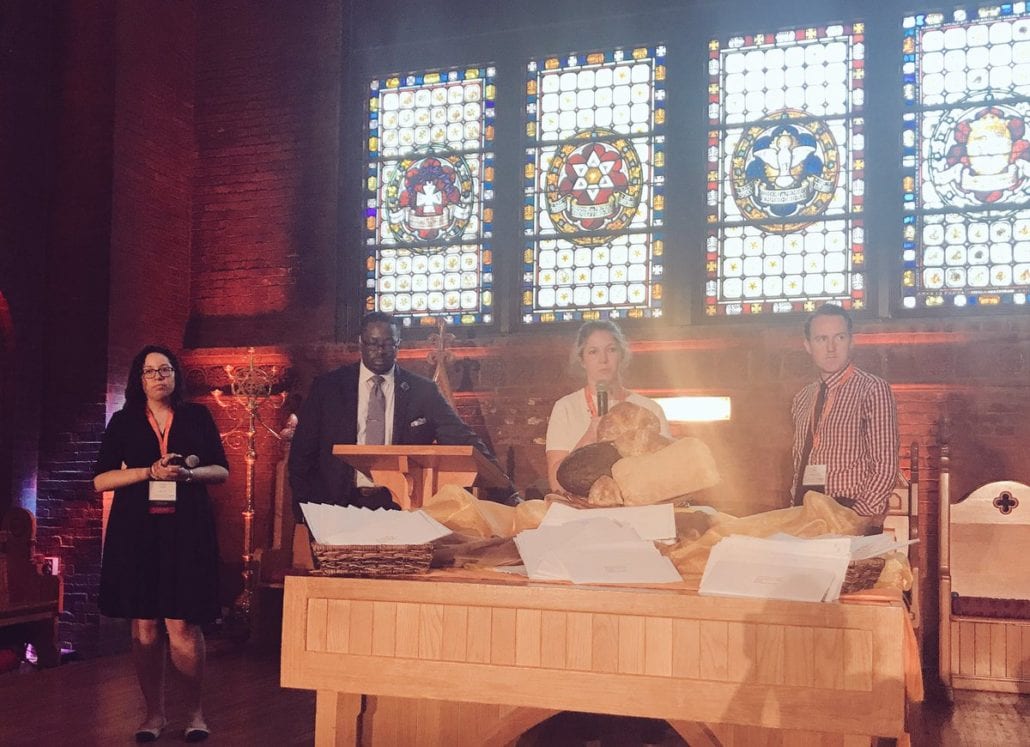 Bread for the World Lobby Day opening and prayer and policy briefing. “The interconnectedness of the briefing and shared prayer was interesting,” shares Kate Tromble. “Organizers didn’t shy away from connecting the faith and justice aspects of the morning, asking us to consider what connecting prayer and the briefing means when we were ready to walk out of the doors of the church that day.” [Bread for the World photo via Twitter]

Later in the morning, the 400+ participants divided by state for advocacy training and planning, and after lunch headed to their state representatives’ offices for scheduled visits.

Issues on the table during visits included opposition to the 2.5 trillion dollars in proposed cuts to hunger programs in the U.S. and worldwide, including support of fully funded domestic programs such as food stamps/SNAP, Medicaid, and the earned income tax credit as well as oppositions to structural changes to these programs that would limit benefits over an individual’s lifetime. 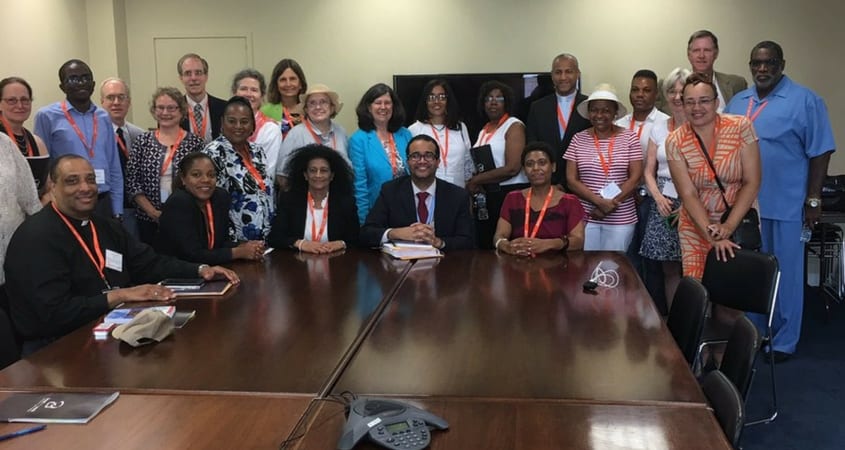 Candra Healy, representing the justice and peace committee at St. Ignatius Catholic Community in Baltimore, joined her state’s delegation in meetings with Senators Van Hollen and Cardin and a staffer in Representative Elijah Cummings’ office. “We spoke about partnerships and the charitable, direct service we as parishes and churches do in our communities,” shares Healy. “What a good investment of our time and efforts as St. Ignatius Parish advocates to end hunger and poverty by 2030.”

During visits, lobby day participants delivered letters written during a coordinated campaign at various churches prior to the event, adding additional voices to the meetings.

Tom Orth, a parishioner at St. Peter Church, a Jesuit parish in Charlotte, North Carolina, attended the lobby day. The parish alone wrote 536 letters, written as part of the “World Letter Writing to Congress” effort. Parishioners were urged to write letters after each Mass the weekend prior to the lobby day, and a children’s table offered the opportunity for children to create posters to accompany letters, encouraging youth of the parish to advocate for the poor and marginalized—a goal of the parish community’s “faith that does justice.”

Janet Schirripa, from St. Raphael Catholic Church, a Jesuit parish in Raleigh, North Carolina, was struck by the opportunity to extend her parish’s commitment to “the least of these” beyond the March for Life, both through attendance at the lobby day and letter writing, which drew more than 700 participants. “It was a lovely way to deepen the understanding of many dimensions of our pro-life efforts,” shares Schirripa. 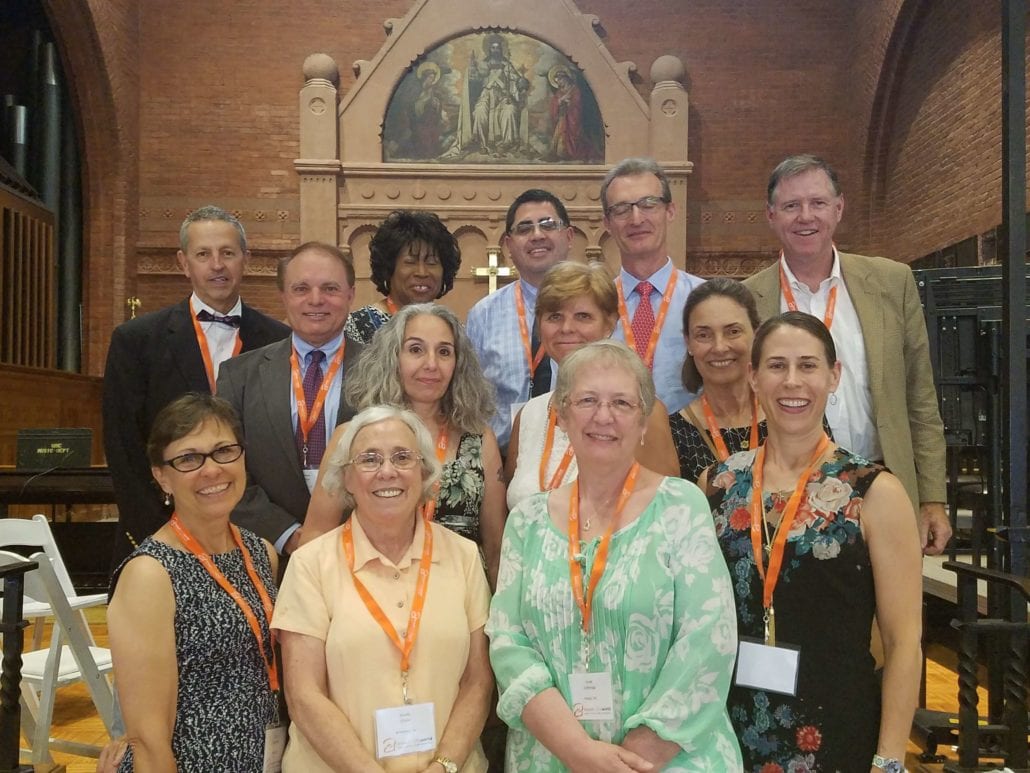 Jesuit parishes members at the 2017 Bread for the World Lobby Day.

Speaking directly of her parish’s place in the Jesuit network, she explains that the lobby day has real potential and is seriously needed to connect St. Raphael to the greater network. “I think many of our folks feel on the periphery of things since we don’t have Jesuit colleges and institutions nearby,” she shares.

While Orth’s attendance was circumstantial—he was visiting his grandson, whose parents are parishioners at Holy Trinity Catholic Church—he was greatly impressed by Tromble’s ability to be a driving force for connecting Jesuit parishes, who formed the largest united Catholic group at the lobby day.

“The Jesuit group felt like family,” shares Tromble. “This day was a practical example of what it means to be Catholic in the Jesuit network—not just words, but faith and justice in action.”

This day was an example of what it means to be Catholic in the Jesuit network—not just words, but faith and justice in action. 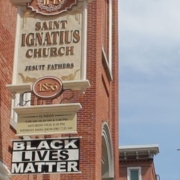 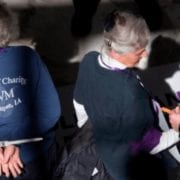 Jesuit Institutions Across the U.S. Uniting in Prayer in Support of Pope Francis’s Encyclical on Climate Change
1 reply