You are here: Home1 / Immigration Resources2 / Learn3 / VIDEO: We Say Welcome, To Show Them That They Matter 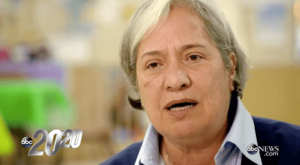 Sister Norma Pimentel is the Executive Director for Catholic Charities of the Rio Grande Valley in McAllen, Texas. Her ministry to those who migrate has become even more well known in recent years since being recognized by Pope Francis in 2015, followed by personal encounters with the Pope during his U.S. visit and the recent announcement of his “Share the Journey” campaign. In this brief video produced by ABC News, Sr. Norma emphasizes the importance of hospitality as a way to remind those who migrate that they are people of God, that they have dignity, and that they matter.

Comforting the Afflicted, Afflicting the Comfortable
Scroll to top
Shares
Share This