Nicole Santis, a senior at Saint Peter’s University, a Jesuit school in Jersey City, NJ, has much to be proud of and excited about. In May, she will graduate from college, the first in her family to do so.

During a time when she should be celebrating she is instead preparing with her family for the deportation of her older brother, Boris Leiva, scheduled for May 1, 2018, just weeks before her graduation. 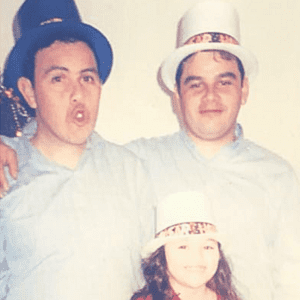 Boris has served as an integral member of his immediate family for many years. Trained as a welder and the founder and owner of his own welding business, he was able to support his family financially, funding Nicole’s college education and living expenses at many points in time for his mother, who has served as caretaker for his autistic adult brother.

Boris has a 9-year-old daughter, Shirley, who was born in the United States. He provides financial support for her, as she lives primarily with her mother, cares for her each weekend and on holidays, and speaks to her daily. “After hearing he will be deported,” shared Nicole, “Boris fears that history will repeat itself. When Boris was only 9 years old his father abandoned him, our two other brothers, and our mother. Shirley has grown very attached to Boris because she speaks to him on a daily basis and spends every weekend with him.”

In 2001, Boris entered the U.S. with a tourist visa. Prior to the expiration of the visa, he returned to Chile. In 2003, he attempted the re-enter the United States, where his visa was confiscated and he was told that insufficient time had passed since he had last visited the country. He was detained by a border patrol agent, and a background check indicated no criminal or immigration history. His family paid a bond of $7,500. After three days of detention, he was sent to stay with his family in West New York, NJ to await Removal Proceedings.

After his arrival in New Jersey, Boris worked briefly for his stepfather in carpentry, then sought training as a welder and became an entrepreneur, starting his own business — all the while paying taxes to the U.S. government.

In 2014, Boris was sharing a beer outside of his home with friends. The group was arrested, although none were intoxicated or operating a vehicle. When Boris was found to have no criminal record he was released without charges. However, while he was being held, a deportation order appeared on his record. Because he had no criminal record, he was determined to be a low priority for deportation and was ordered to check in annually with ICE.

Boris learned that a letter ordering his deportation had been sent, but never received in 2003. His mother has since applied for a green card on his behalf, which will not be processed due to his previous encounter with border patrol at the U.S./Mexico border.

On March 8, 2018, during his routine annual check-in with ICE, Boris was ordered to be removed from the country and return to Chile on April 5, 2018. This order was extended to May 1, 2018 to allow him to renew his Chilean passport.

Boris is a member of a close-knit Catholic family. His daughter, a U.S. citizen, will lose her father. His mother and autistic brother will lose a family member who has provided vital emotional and financial support.

His sister, Nicole, will not have her brother in the audience as she graduates from Saint Peter’s University this spring, nor will she have his supportive presence by her side as she begins a graduate program in strategic communications in the fall at SPU.

I am writing today to request you suspend the deportation of Mr. Boris Leiva who is scheduled to be deported to Chile on May 1, 2018.

Mr. Leiva is a longtime resident of the New York and New Jersey area, father of a four-year-old daughter, and support to his two siblings and mother. This includes financial and personal support of his 42-year old brother who has autism. Not only is Mr. Leiva a vital part of his family, he has also contributed to the New York City region as an entrepreneur who has cultivated a thriving welding business that serves his community.

I am particularly aware of the situation of his half-sister, Nicole Santis, a senior at Saint Peter’s University in Jersey City, who will earn a business degree when she graduates on May 21. Boris has been a key figure in Nicole’s life, and she desperately hopes that Boris can be present to celebrate as she becomes the first person in her family to graduate from college.

Mr. Leiva’s family needs him. I respectfully request that you suspend his deportation without delay.