Blog - Latest News
You are here: Home1 / Voices for Justice2 / Immigration3 / Real Needs, Not Fictitious Crises Account for the Situation at U.S.-Mexico...

[Editor’s Note: This essay was originally published by the Center for Migration Studies of New York on March 17, 2021.]

The number of unaccompanied children and asylum-seekers crossing the U.S.-Mexico border in search of protection has increased in recent weeks. The former president, his acolytes, and both extremist and mainstream media have characterized this situation as a “border crisis,” a self-inflicted wound by the Biden administration, and even a failure of U.S. asylum policy. It is none of these things. Rather, it is a response to compounding pressures, most prominently the previous administration’s evisceration of U.S. asylum and anti-trafficking policies and procedures, and the failure to address the conditions that are displacing residents of the Northern Triangle states of Central America (El Salvador, Guatemala, and Honduras), as well as Venezuela, Cuba, Haiti, and other countries. In Central America, these conditions include: 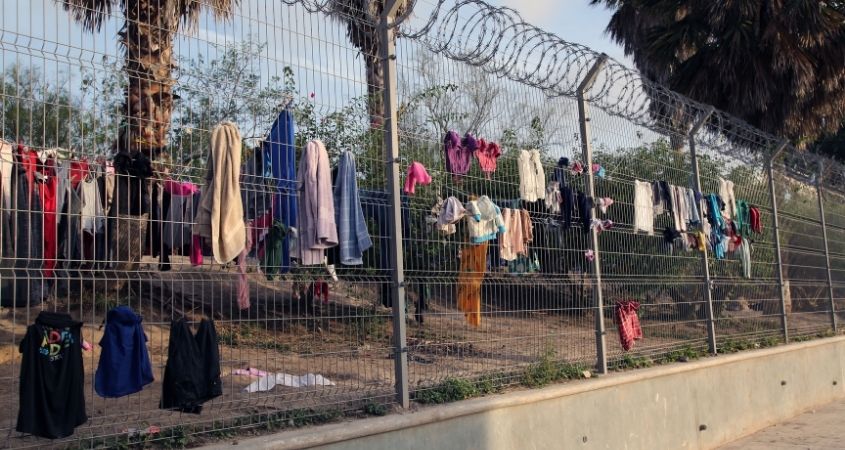 Laundry hangs to dry on a fence at a tent camp in Matamoros, Mexico, on the U.S.-Mexico border, where many people seeking asylum in U.S., primarily from Central America, have waited. [Image: Vic Hinterlang/Shutterstock]

This is not the first time large numbers of unaccompanied children have sought to enter the United States. In the late summer of 2016, the Center for Migration Studies (CMS) and the Scalabrini International Migration Network (SIMN) embarked on a fact-finding trip to El Salvador, Guatemala, and Southern Mexico to visit migrant shelters and detention facilities, which mostly held deportees from Mexico. More than 160,000 unaccompanied children and a similar number of migrants traveling in family units had arrived at the U.S.-Mexico border in the 18-month period prior to our trip. In meetings with public officials, community groups, and migrants, we heard repeatedly of the threats to children and adolescents living in communities controlled by gangs. Boys faced conscription, girls sexual enslavement, and family breadwinners extortion. The gangs met even perceived resistance with violence. Children without parents at home were particularly vulnerable. Many children negotiated a daily gauntlet in their trip to and from school, passing through neighborhoods controlled by competing gangs that demanded their fidelity. Gangs had also taken over many public recreational spaces, leaving little safe space for these children. Not surprisingly, some families sought to protect their children by moving, and others by placing their children with family members in other communities. Many adolescents fled their countries of birth, often in an attempt to join their parents in the United States.

At the time, the Obama administration had announced its plans to establish an in-country resettlement program in the Northern Triangle states and an emergency resettlement program in Costa Rica for imperiled persons. It had also initiated the Central American Minors (CAM) program, a modest initiative that nonetheless provided a legal and safe way for at-risk children from El Salvador, Guatemala, and Honduras to unite with their legally present parents in the United States. The Trump administration later terminated this program.

Five months after we returned from Central America, the Trump administration assumed office and began to dismantle the U.S. asylum system. The new administration encouraged border officials—many of whom needed little prodding—to violate their statutory responsibility to refer asylum-seekers and others expressing a fear of violence if returned home to the U.S. asylum system. These officers initially employed a variety of lies and ruses, telling migrants for example that there was no room in the United States, that it no longer granted asylum to persons from countries that were not at war, and many other claims that happened to occur to them on a given day. The Trump administration soon adopted more formal policies and strategies to block access to the border and the asylum system.

Among its abuses, in April 2018, Attorney General Sessions instituted the “zero tolerance” policy of criminally prosecuting asylum-seekers and separating children from their parents. Hundreds remain separated today. In January 2019, DHS implemented the perversely misnamed Migrant Protection Protocols, which forced tens of thousands of migrants to wait for their U.S. asylum hearings in perilous conditions in Mexican border cities. As of December 2020, Human Rights First had “identified more than 1,300 public reports of violent attacks on asylum seekers and migrants”—certainly an undercount of actual acts of violence—who were returned to Mexico under this program. In 2019, the United States entered cooperative agreements with El Salvador, Guatemala and Honduras, which required migrants who passed through these dangerous states to seek asylum in them.

On March 20, 2020, the Centers for Disease Control and Prevention (CDC) issued an order suspending the entry on public health grounds of non-essential travelers from Mexico and Canada, regardless of their country of origin. This order came at a time when Immigration and Customs Enforcement (ICE) was spreading COVID-19 beyond U.S. borders by deporting infected detainees to Central American and Caribbean states. The CDC order led to the expulsion of asylum-seekers without a hearing and of unaccompanied children in violation of the Trafficking Victims Protection Reauthorization Act of 2008 (TVPRA). The TVPRA requires DHS to transfer unaccompanied children from non-contiguous states (not Mexico or Canada) to the Office of Refugee Resettlement (ORR) within 72-hours. The children are then placed in the care of a family member, ORR shelter, or foster home over the course of their removal proceedings. This law seeks to prevent the children’s trafficking and mistreatment. The CDC order—which has been economically disastrous for bi-national U.S. border communities and a barrier to their economic recovery—remains in effect for families and individuals, but not for unaccompanied minors.

This partial review of the Trump administration’s anti-asylum policies suggests the difficulty of rebuilding the U.S. asylum system—its infrastructure, legal standards, procedures, and processing capacity. As DHS Secretary Mayorkas has put it:

“The prior administration completely dismantled the asylum system. The system was gutted, facilities were closed, and they cruelly expelled young children into the hands of traffickers. We have had to rebuild the entire system, including the policies and procedures required to administer the asylum laws that Congress passed long ago.”

Over the last few weeks, a false picture has also emerged of the putative enforcement prowess of the Trump administration, which made cruelty a pillar of its strategies. Yet even on its own narrow, transactional terms, this Administration did not effectively enforce the law. In 2000, the Border Patrol arrested 1.6 million migrants. Over its last four years, the Obama administration apprehended an average of 408,000 migrants per year on the southwest border. Apprehensions have long served as an imperfect metric of unauthorized entries. These numbers fell slightly in the first two years of the Trump administration, averaging around 350,000 per year. However, in 2019 they jumped to 852,000, before falling again in FY 2020 due to the pandemic and to practical and health-related restrictions on movement. Border Patrol arrests and public health expulsions spiked again—averaging more than 71,000 per month—over the last four months of the Trump Administration. They increased to roughly 100,000 in February 2021, the first full month of the Biden administration, and may reach 130,000 in March. Yet the overwhelming majority of recent arrests have been of single adults or members of family units, who are expelled to Mexico under the CDC order.

In response to increased admissions of unaccompanied children, the Biden administration has reopened ORR temporary shelters in order to process and reunify these children with U.S. family members. Roughly 1,400 children have now been kept in Border Patrol facilities for longer than 72-hours, a major concern and a violation of the Flores settlement. Lawyers and community advocates are closely monitoring these situations to ensure that children are matched with family sponsors quickly and, in the meantime, that they are held in safe and appropriate facilities. By contrast, the Trump administration held children incommunicado in hotels before expelling them and made no attempt to ensure their safety in the United States or to reduce their vulnerability following expulsion.

In 2020 alone, an estimated 300,000 residents of the Northern Triangle states suffered internal displacement and 515,000 fled their countries. The Biden administration should be credited for its commitment to address the conditions uprooting Central Americans, for supporting a regional response to the region’s multi-faceted humanitarian challenges, and for its attempt to reconstitute and strengthen the U.S. asylum system. The failed strategies of deterrence, interception, detention, and criminal prosecution have never prevented desperate migrants from reaching U.S. borders and territory.

The Biden Administration’s goals will not be realized in the short-term, and COVID-19 has made every aspect of governing more challenging. The border is no exception. The Administration needs to find sufficient, fitting accommodations for unaccompanied children and safely reunify them with family members. It has also made it a priority to invest in the immigration court system, the asylum corps, and ORR, so that properly trained officials can care for these children and can fairly and expeditiously adjudicate their cases. In other words, it is beginning the long process of restoring both the U.S. asylum system and the rule of law to the U.S. southern border. On March 15, the Frontera Dispatch of the Hope Border Institute in El Paso reported:

The idea of a border crisis may sell newspapers, but it doesn’t fly for those of us who are doing the work of welcome at the border. The wind-down of the Remain in Mexico program has proceeded smoothly, with a COVID testing and legal support process in place on the Mexican side and plenty of helpful volunteers on the U.S. side to help people get to shelters and then on to their families.

It’s true that we’ve seen increased numbers of unaccompanied minors and families arriving at the border. It’s part of a seasonal migration trend heightened by devastation in Central America after two hurricanes and a year of pandemic. Capacity in processing facilities is strained by COVID restrictions, leading to a backlog in how quickly vulnerable populations can be moved into appropriate care. What we need now from the federal government is transparent communication on how it will expand processing capacity and how it will COVID-test families released from Border Patrol custody.

The real immigration crisis is not at the border, but in the failure of the political branches of the federal government to respond effectively to the conditions driving forced migration, to establish orderly and viable legal immigration policies, to legalize the increasingly long-tenured undocumented population, and to reform and invest sufficiently in the U.S. asylum and immigration court systems. These real needs can be met, but it will require much more than the normal political grandstanding.

Donald M. Kerwin, Jr. has directed the Center for Migration Studies of New York (CMS) since September 2011. He previously worked for the Catholic Legal Immigration Network, Inc. (CLINIC) between 1992 and 2008, serving as its executive director (ED) for 15 years and its interim ED in 2012 and 2013. Between 2008 and 2011, Kerwin served as vice president for programs at the Migration Policy Institute (MPI), where he wrote on immigration, labor standards, and refugee policy issues. He has also served as an associate fellow at the Woodstock Theological Center where he co-directed Woodstock’s Theology of Migration Project; a non-resident senior fellow at MPI; a member of the American Bar Association’s Commission on Immigration; a member of the Council on Foreign Relations’ Immigration Task Force; a board member for Jesuit Refugee Service/USA, the Capital Area Immigrant Rights Coalition, and the Border Network for Human Rights; an advisor to the USCCB Committee on Migration; and a member of numerous advisory groups. Kerwin writes and speaks extensively on immigration policy, refugee protection, access to justice, national security, and other issues. 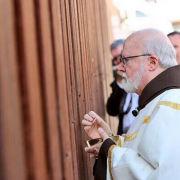 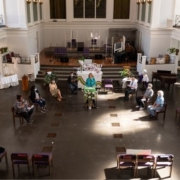 Day 37: Our Vacillating Hearts and Minds

Day 38: Armor of Peace and Justice
Scroll to top
Shares
Share This