In the summer of 2021, Julie Banks and Jennifer Napier, both who work for the University of Dayton, were invited to attend a workshop hosted by the Ignatian Solidarity Network (ISN)—Working Together: Building a Catholic Campus Culture of Ethical Consumerism.

The workshop was the unofficial launch of a new initiative formed as a partnership between the ISN and Ethix Merch, an ethical promotional products supplier, called the Catholic Ethical Purchasing Alliance (CEPA). Banks and Napier’s presence at the workshop created a quick synergy between CEPA and the University of Dayton, particularly around work to ethically source promotional products and apparel for Catholic campus bookstores. 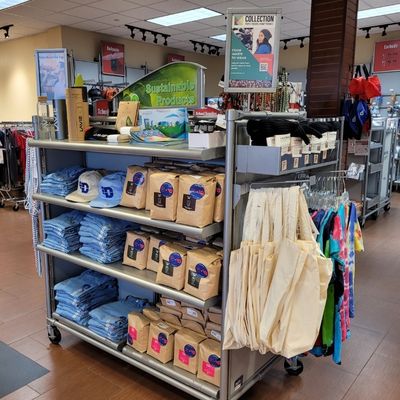 A sustainable and ethical products display in the University of Dayton bookstore, featuring UD-branded shirts, hats, tote bags, and beanies from COLLECTION, a member of The Carolina Textile District.

The University of Dayton has long been committed to ethical sourcing on campus, with sustainability as a priority since the 1970s. The school became the 38th U.S. Fair Trade Campus in 2016, and sustainable, fair trade, and other ethically-sourced products can be found across campus in the bookstore, copy center, coffee shops, dining halls, and even includes a second hand store for UD apparel. The university has embraced this as part of its mission as a Catholic university in the Marianist tradition as a means to “promote freedom, equality, and sanctity of life.”

Sara Harrison, another UD employee, is the school’s executive director of procurement and payable services. Part of her role on campus is tracking procurement for the common good—monitoring supplier diversity, sustainability, fair trade status, and human rights as they relate to items purchased by the university. The fundamental question she is tasked with asking, she explains, is “how much are we spending to support the things that are important to us” as a Catholic, Marianist university?

Jennifer Napier, who attended ISN’s 2021 ethical purchasing workshop, is senior merchandise manager at the University of Dayton. Her work at UD has always focused on ethical sourcing—including seeking out vendors who do “more” but aren’t “certified.” This is where CEPA came into play—UD is fairly unique in that the campus bookstore is owned by the university itself, so its agility in adding new products is high. Napier was struck by the work of CEPA, particularly with ethical producers in the U.S. through Ethix Merch—including the Carolina Textile District—a member-governed and member-driven network of values-aligned textile manufacturers in North and South Carolina with whom CEPA and Ethix have a strong relationship. 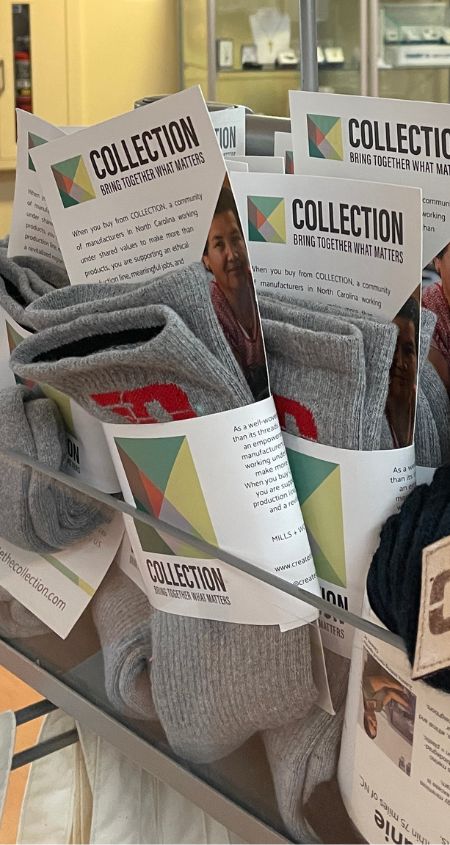 Ethically-produced UD-branded socks made with recycled materials, from COLLECTION.

UD is very committed to telling the story of products it sources and CEPA’s work plays directly to that commitment. The Carolina Textile District, in particular, has a compelling story to tell—including the revitalization of a historical textile-production region, the farming and processing of local, sustainable cotton, and the ways in which a worker-owned factory business model can meet the needs of both workers and their families.

CEPA’s products also hit on multiple priorities of UD’s purchasing program—namely care for the person, but also a concept called the circular economy—part of the story UD can tell about the products in their bookshop. The circular economy model is essentially a zero-waste way of doing business—eliminating manufacturing waste and even creating new products from old, including recycling old socks into new, university-branded socks.

The next step in UD’s CEPA engagement is bringing students into the work. When school resumes in the fall, the student government association will be called upon to give input into product marketability and as student ambassadors, promoting CEPA’s products to their peers—and allowing university staff to further form students in the mission of UD and in Catholic social teaching…forming individuals who challenge oppressive systems through their collective purchasing power. 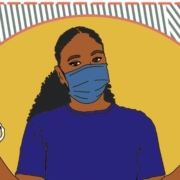 Creating an Ethical Textile Economy Amid the Pandemic 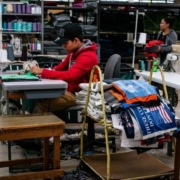 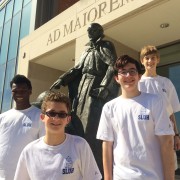 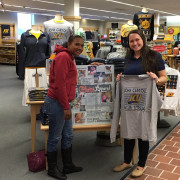 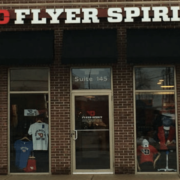 When God Shows Up

Stayed on Jesus
Scroll to top
Shares
Share This