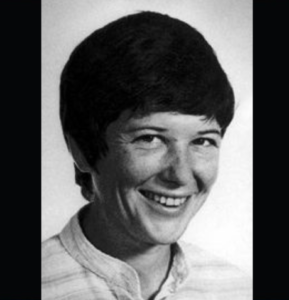 Ita Ford was born in Brooklyn, New York on April 23,1940. After college at Marymount, she joined the Maryknoll Sisters in 1961. Health problems forced her to leave after three years. This was a difficult personal trial for Ita as she saw her plans for her life derailed.

However, after seven years working as an editor for a publishing company, she reapplied in 1971 and was accepted. In 1973 she was assigned to Chile, arriving there only a few months before the September 11,1973, US-backed military coup that overthrew the democratically elected government of Salvador Allende.

The following years were bitter ones for Chile. Thousands of people, suspected government opponents, were rounded up and killed or disappeared. Thousands more endured torture and imprisonment. Ita lived in a poor shantytown of Santiago with Sr. Carla Piette. There the sisters ministered to the needs of the people during the time of repression, fear, and increased misery for the poor.

Her years in Chile had a profound impact on Ita. In 1977, coping with feelings of inadequacy in the face of the harsh reality, she wrote, “Am I willing to suffer with the people here, the suffering of the powerless, the feeling impotent? Can I say to my neighbors – I have no solutions to this situation; I don’t know the answers, but I will walk with you, search with you, be with you. Can I let myself be evangelized by this opportunity? Can I look at and accept my own poorness as I learn it from the poor ones?”

But even in the midst of this anguished searching, Ita was known for her lively and generous spirit. Maryknoll friends said of her, “Ita’s buoyant personality, her wit, her sense of humor and fun were striking contrast to the suffering and pain she experienced throughout her life. Her twinkling eyes and elfin grin would surface irrepressibly even in the midst of poverty and sorrow.”

In 1980 Ita and Carla responded to a call for help from El Salvador’s Archbishop Oscar Romero. While they were en route to their new mission, they learned of Romero’s assassination, March 24,1980. They entered into the martyred church of El Salvador.

In June of that year, the two sisters began working with the Emergency Refugee Committee in Chalatenango. In this work Ita saw first-hand the Salvadoran reality, working with the homeless, the persecuted, the victims of savage repression and counterinsurgency war, the violence of a military dictatorship determined to wipe out any trace of opposition with incredible ruthlessness.

Ita and Carla wrote to Maryknoll President Melinda Roper, “Since the death of Monsignor Romero the news coverage on Salvador has declined to almost nothing. The Committee fears that decisive action will be taken by our [US] government under the guise of ‘stopping communism’ – and that all of Central America will be involved if it happens. It’s a heavy scene – but if we have a preferential option for the poor as well as a commitment for justice as a basis for the coming of the Kingdom, we’re going to have to take sides in El Salvador – correction – we have.”

On August 23 Carla and Ita took their jeep to pick up a political prisoner and take him home – a service they often performed for those whose lives were threatened with violence. On the way back from his house, they were caught in a flash flood as they were crossing a river. Carla pushed Ita out a window. As the rampaging water carried her downstream, Ita remembered praying, “Receive me, Lord, I’m coming.” Finally she managed to grab onto a branch and pull herself to the river bank.

Carla’s body was found the next morning. For Ita the impact of the loss of her dearest friend was profound, and left her with the question of why she had been spared. A catechist working with Basic Christian Communities, Hna. Noemí Ortiz, spoke of visiting Ita after the tragedy.

“After we rescued Ita from the waters, I remember Ita [lying] on the bed and we were all around her, and she was sharing the following with us. She said that Carla had just written a letter to a friend saying, ‘I do feel, and today I can say, now I have a heart of flesh.’ And Ita said, ‘You’re right, we do have hearts of flesh now. The Salvadoran people have converted us’.”

Maura was a great personal support for Ita, and Maura said of her new colleague, “Ita is a powerful example, a blessing to be with her.”

But real healing came for Ita at a five-day regional assembly of Maryknoll Sisters which took place on the Thanksgiving weekend. It was there that friends said they saw her old spirit returning.

At the closing liturgy on December 1, Ita read a passage from one of Romero’s final homilies: “Christ invites us not to fear persecution because, believe me, brothers and sisters, the one who is committed to the poor must run the same fate as the poor, and in El Salvador we know what the fate of the poor signifies: to disappear, be tortured, to be held captive – and to be found dead.”

The following day, December 2,1980, she and Maura boarded a plane to return to El Salvador.