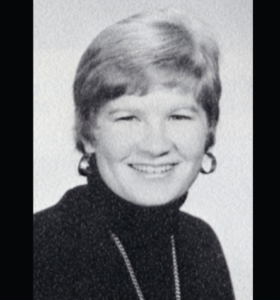 Jean Donovan, the youngest of the four church women killed on December 2,1980, was born on April 10,1953. She was the younger of two children and raised in an upper-middle class family in Westport, Connecticut. Her father, Raymond, was an executive engineer, and later chief of design, at the nearby Sikorsky Aircraft Division of the United Technologies, a large defense contractor for the US and manufacturer of helicopters used in the Vietnam War.

Jean was very close to her brother Michael and was deeply affected when he was struck with Hodgkins disease, from which he made a complete recovery. The experience of the disease and his courageous battle to conquer it left a strong impression on Jean and, as she said later, gave her a deeper sense of the preciousness of life.

Jean received a masters degree in business administration from Case Western Reserve University, then took a job as management consultant for an accounting firm in Cleveland. She was on her way to a successful business career.

Not the shy or withdrawn type, Jean was described by friends as outgoing, a “driver,”, a “joker,” who often did outrageous things to get attention. Her mother, Patricia, described her as “a gutsy, loving, caring person.” She loved riding her motorcycle and was once known for pouring scotch, her drink of choice, over her cereal in the morning. Her spirit and generosity drew loyal friends who later were left to grapple with the choices Jean made.

But Jean was not content and began a search for some deeper meaning in life. While volunteering in the Cleveland Diocese Youth Ministry with the poor, she heard about the diocesan mission project in El Salvador. It was what she was looking for.

Jean attributed her decision to “a gut feeling,” and said “I want to get closer to Him, and that’s the only way I think I can.”

The director of the mission program, Maryknoll Sister Mary Anne O’Donnell, described Jean as intelligent, loving and apostolic and believed that, despite (or because of?) her fun-loving, hard-living ways, she had the signs of being a good missioner.

Jean had also been much affected by time she had spent in Ireland as an exchange student, where a priest who befriended her, Fr. Michael Crowley, a former missionary in Peru, introduced her to a different world, a world of the poor and a life of faith committed to a more radical following of the example of Jesus of Nazareth. Jean was haunted by what she experienced there, and this brought her to question the values of her own life.

After her training, including a stint at Maryknoll, Jean arrived in El Salvador in July 1979, a time when the repression was intensifying and the church had become a major target. She became Caritas coordinator for the diocesan mission program. In addition to keeping the books, she worked in La Libertad with Dorothy Kazel, distributing food for the poor and the refugees and carrying out family education programs. Her mother Patricia said of her work, “Jean took her commitment to the campesinos very seriously. She was strongly motivated by St. Francis of Assisi and by Archbishop Oscar Romero. She translated God’s teachings into clothing for the poor, feeding the hungry, and caring for the wounded refugees – mainly children – who had lost what little they had…”

As for the people of La Libertad, they loved Jean Donovan and dubbed her, “St. Jean the Playful.”

Jean was very devoted to Msgr. Romero, often coming to the cathedral on Sundays to hear his homilies which at that time were the only source of news and truth left in El Salvador. After his assassination, Jean and Dorothy were among those who took turns keeping vigil at his coffin. And they were present in the cathedral when the overflow crowd in the plaza attending his funeral on March 30,1980, was attacked by security forces, resulting in a panicked stampede. The massacre left 44 dead and hundreds of wounded. As Jean sat crowded among the desperate people who fled into the cathedral for safety, she fully believed that she might die that day.

The repression touched her in other very personal ways. Friends were killed by death squads. She witnessed one such killing.

In the fall of 1980 Jean took a break from this tense reality to attend the wedding of a friend in Ireland. There she was reunited for a time with her fiance, Dr. Douglas Cable. Many of her friends tried to persuade her to leave El Salvador, but she comforted them with the quip, “They don’t kill blond-haired, blue-eyed North Americans.”

In fact, she and Dorothy often used their very visible presence to accompany people in danger, or to get supplies into areas not accessible to others. They became a well-known sight, driving along the country-side in their mission van.

As the violence engulfed the country, Jean felt the personal challenge of trying to cope, to understand what was happening. It tested her faith. “I think that the hardship one endures maybe is God’s way of taking you out into the desert and to prepare you to meet and love him more fully.”

And while she had been a loyal patriotic Republican, she also saw the direct connection between the violence in El Salvador and the policies of the US. Ronald Reagan won the presidential election in November 1980 promising a strong stand against “Communism.” The Salvadoran government got the message.

Wrote Patricia, “Things grew progressively worse in El Salvador after the United States election…The military believed they were given a blank check – no restrictions. In light of what happened, who’s to say they weren’t? Jean had told us that she feared there would be a bloodbath in El Salvador.”

Two weeks before she was murdered, with the bloodbath already begun, she wrote to a friend in Connecticut: “Several times I have decided to leave El Salvador. I almost could except for the children, the poor bruised victims of this insanity. Who would care for them? Whose heart would be so staunch as to favor the reasonable thing in a sea of their tears and helplessness. Not mine, dear friend, not mine.”

For the family of Jean Donovan, her death was an indescribable blow. When she had first told them she was going to El Salvador, they had to pull out a map to find out where it was. Now they had lost their only daughter in this tiny country that had become a major focus of US foreign policy.

But Jean’s death was not the only blow; following her death they had to deal with what for them became the betrayal by the very government they thought embodied values of justice and political good. As they approached the State Department for information, they were treated coolly, then with hostility. Eventually they were told to stop bothering State Department officials. In April 1981, at a hearing before the Senate Foreign Relations Committee, all but one Republican Senator left the room when Michael appeared to testify.

The final insult came when the Donovans received a bill from the State Department for $3,500 for the return of Jean’s body to the US.

The scandal of the way the US government treated this case, including Reagan administration officials accusing the women of “running a roadblock,” of engaging in “an exchange of fire,” of being “not just nuns…but political activists,” enraged the Donovans and other families of the women.

As levels of US military aid escalated, Jean’s mother wrote, “Jean deserves, at the very least, that her native land not reward her killers.”

The head of the National Guard, whose troops were responsible for the murders, Gen. Eugenio Vides Casanova, went on to become Minister of Defense under the “democratic” government of José Napoleon Duarte (1984-89).

Jean’s time in El Salvador led her to those fundamental challenges of the meaning of life, of faith, in a world torn by injustice and violence against the poorest, the most vulnerable. It was a personal challenge.

“I’m 26 years old. I should be married. I shouldn’t be running around doing all of these things. But then I think, I’ve got so many things I want to do. It’s hard when I see my friends getting married and having babies, that’s something I’ve thought about…am I ever going to have kids? Sometimes I wonder if I’m denying that to myself. I really don’t want to, but that’s maybe what I’m doing. And then I sit there and talk to God and say, why are you doing this to me? Why can’t I just be your little suburban housewife? He hasn’t answered yet.”