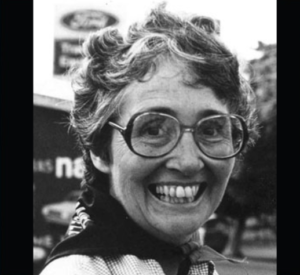 Maura Clarke was born on January 13,1931, and lived in Queens, New York. She joined Maryknoll in 1950. In 1959 she was sent to Nicaragua where she taught school and did pastoral work in a Capuchin parish in Siuna , a remote city in eastern Nicaragua.

In the early 1970’s she was working in a parish in the capital city of Managua and was there at the time of the devastating earthquake of 1972. Managua was hit hard; an estimated 10-20,000 people were killed. Trapped on an upper floor of the parish house, the Maryknoll Sisters climbed down through a window with a rope of sheets and immediately began ministering to the wounded and digging out the bodies of the dead.

Friends said of Maura, “She was outstanding in her generosity…She would give whatever she had to the poor. She was accustomed to living in poverty.” Others said she was “supportive…always saw the good in others…was very gentle…could always make those whose lives she touched feel loved.”

In Nicaragua, she was known by the people as “the angel of our land.”

In 1977 Maura returned to the US to take her turn doing the work of mission and vocation promotion. Traveling in various parts of the country with the Maryknoll Sisters World Awareness Team, she once said of this task, “I see in this work a channel for awakening real concern for the victims of injustice in today’s world; a means to work for change, and to share…deep concern for the sufferings of the poor and marginated, the non-persons of our human family.”

Maura was not in Nicaragua for the July 19,1979, fall of the Somoza dictatorship, but she greeted the news with joy. After 20 years in the country, she knew only too well the full impact of a military dictatorship on the lives of the people. And she saw with her own eyes how the international relief that came into the country after the earthquake ended up in the pockets of the dictator, his family and friends among the elite. Meanwhile, the lives of the poor, especially in the devastated capital, became more desperate.

She returned for a visit in 1980, in time for the first anniversary celebration of the victory. She was described as “bubbling with joy” at the spirit she found upon her return, a spirit of incredible relief, of hope and freedom after the 45-year Somoza dynasty. And she was happy to be back with her friends of 20 long years.

But Maura had also been pondering the appeal of Archbishop Romero for help in El Salvador. On August 5, just two and a half weeks before the death of Sr. Carla Piette, Maura Clark went to El Salvador to explore the possibility of working there. It was a hard decision – to leave behind 20 years of relationships in Nicaragua at such an exciting moment in its history, and to take on the human and pastoral challenge of El Salvador in a time of persecution. After Carla’s death on August 23 Maura decided to take her place working at Ita’s side.

She was quickly immersed in the emergency work among the victims of the repression. “We have the refugees, women and children, outside our door and some of their stories are incredible. What is happening here is all so impossible, but happening. The endurance of the poor and their faith through this terrible pain is constantly pulling me to a deeper faith response.”

The days were often difficult and the internal struggle radically challenging. “My fear of death is being challenged constantly as children, lovely young girls, old people are being shot and some cut up with machetes and bodies thrown by the road and people prohibited from burying them. A loving Father must have a new life of unimaginable joy and peace prepared for these precious unknown, uncelebrated martyrs.

“One cries out: Lord how long? And then too what creeps into my mind is the little fear, or big, that when it touches me very personally, will I be faithful?”

Maura decided she would stay in El Salvador. She and Ita, and two other Maryknoll Sisters working in El Salvador, travelled in November to Nicaragua for the regional assembly. It was there that Maura affirmed her commitment before all the Maryknoll Sisters of the Central America region. She said she would remain in El Salvador, “to search out the missing, pray with the families of prisoners, bury the dead, and work with the people in their struggle to break out of the bonds of oppression, poverty, and violence” (words written by friends of Maura). She told them the days would be difficult and dangerous, but assured the other sisters of her “certain confidence in God’s loving care of her, Ita, and all the people.”

“I want to stay on now,” she wrote. “I believe now that this is right…Here I am starting from scratch but it must be His plan and He is teaching me and there is real peace in spite of many frustrations and the terror around us and the work, etc. God is very present in His seeming absence.”

The day following the assembly, Maura gave her all, even her very life, for the people of El Salvador.