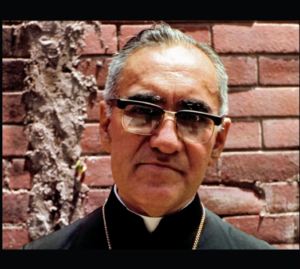 On the night before his death, Saint Oscar Arnulfo Romero, broadcasting on live radio, relayed a message of hope to the people of El Salvador. Romero called the people of the Salvadoran military to rethink their actions amidst a civil war, “I would like to appeal in a special way to the men of the army, and in particular to the troops of the National Guard, the police, and the garrisons. Brothers, you belong to our own people. You kill your own brother peasants; and in the face of an order to kill that is given by a man, the law of God that says ‘Do not kill!’ should prevail.”

While beautifully spoken and true to the Gospel, a message as direct and powerful as this ensured Romero’s life to be in danger. Saint Oscar Arnulfo Romero was shot and killed on March 24, 1980 while saying Mass with his people. Romero worked tirelessly to educate the people of El Salvador while their country was at war with itself, providing citizens with weekly radio sermons that many considered to be the most trustworthy news source available to the public.  He was appointed archbishop of San Salvador in 1977. His impactful work with the marginalized and his undeniable faith in justice led him to be recognized as a martyr by Pope Francis, beatified, and canonized.