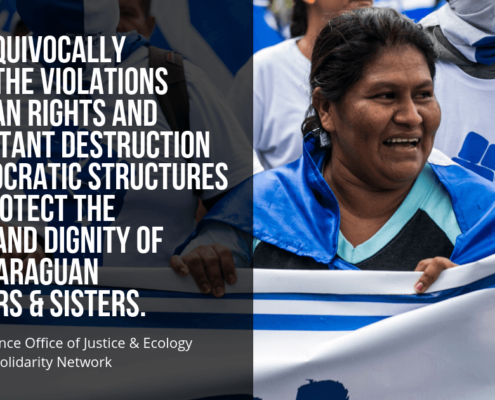 The Jesuit Conference Office of Justice and Ecology and the Ignatian Solidarity Network have issued a statement of continued solidarity with the people of Nicaragua on the six-month anniversary of nonviolent protests that led to the deaths toll of at least 300 civilians at the hands of police and government-sponsored paramilitary groups. The initial protests led to the deaths of more than two dozen people. Álvaro Manuel Conrado Davila, a 15-year-old student at Instituto Loyola, the Jesuit High School in Managua, Nicaragua, was among the victims killed while peacefully protesting on April 20.
https://ignatiansolidarity.net/wp-content/uploads/2018/10/nica-statement-fb-1.png 630 1200 ISN Staff https://ignatiansolidarity.net/wp-content/uploads/2013/04/ISN_Color_Transparent_Large.png ISN Staff2018-10-18 14:29:132018-10-29 12:52:36Six Months Into Crisis Jesuits and ISN Express Continued Solidarity with Nicaraguans