WASHINGTON, D.C.—Bishop Joe S. Vásquez, Chair of the Migration Committee and Bishop of Austin, Texas, has issued a response to recent petitions by various state attorney generals and governors which asked the U.S. Department of Justice to terminate the Deferred Action for Childhood Arrivals (DACA) program, which currently provides a temporary status to over 750,000 young people throughout brought to the U.S. without documentation as children.

The following is Bishop Vásquez’s statement:

The Catholic Bishops have long supported DACA youth and continue to do so. DACA youth are contributors to our economy, veterans of our military, academic standouts in our universities, and leaders in our parishes. These young people entered the U.S. as children and know America as their only home.  The dignity of every human being, particularly that of our children and youth, must be protected.

I urge the Administration to continue administering the DACA program and to publicly ensure that DACA youth are not priorities for deportation. 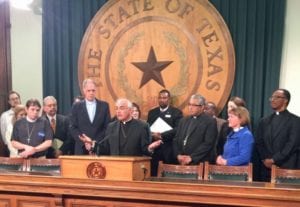 However, DACA is not a permanent solution; for this reason, I also call on Congress to work in an expeditious and bipartisan manner to find a legislative solution for DACA youth as soon as possible. My brother bishops and I pledge continuing efforts to help find a humane and permanent resolution that protects DACA youth. Additionally, I note the moral urgency for comprehensive immigration reform that is just and compassionate. The bishops will advocate for these reforms as we truly believe they will advance the common good.Lastly, to DACA youth and their families, please know that the Catholic Church stands in solidarity with you.  We recognize your intrinsic value as children of God.  We understand the anxiety and fear you face and we appreciate and applaud the daily contributions you make with your families, to local communities and parishes, and to our country.  We support you on your journey to reach your God-given potential.

Support for DACA recipients and other students without documentation has come from many corners of the Catholic Church, in particular leaders in Catholic higher education. Earlier this year 65 Catholic college and university presidents asked for a meeting with the Secretary of Homeland Security Kelly to discuss immigration policy and the situation of DACA recipients. Within the Jesuit network, colleges and universities have made institutional-wide commitments to stand with undocumented students in recent years, including Saint Peter’s University’s establishment of a Center for Undocumented Students; Loyola University Chicago’s Medical School’s public willingness to accept undocumented medical students; and the development of campus resource and support programs for students at Jesuit schools across the country.

“The system is broken. We need comprehensive immigration reform. It is overdue.”

Bishop Mark J. Seitz, bishop of the Catholic Diocese of El Paso, spoke today with Catholic leaders and media from across the country regarding his pastoral letter entitled, “Sorrow and Mourning Flee Away: Pastoral Letter on Migration to the People of God in the Diocese of El Paso,” (English / Español) which was officially signed earlier today during an event in front of religious and civic leaders in El Paso.

The virtual conversation was organized by Hope Border Institute and broadcast from Sacred Heart Church of El Paso, a Jesuit parish just yards away from the U.S.-Mexico border, and offered an opportunity for Bishop Seitz to share an overview of the letter and respond to questions. The letter is the first official pastoral letter on immigration issued by a U.S. Catholic bishop in a number of years and builds on a pastoral letter issued by the bishops conferences of the United States and Mexico, “Strangers No Longer: Together On the Journey of Hope.” 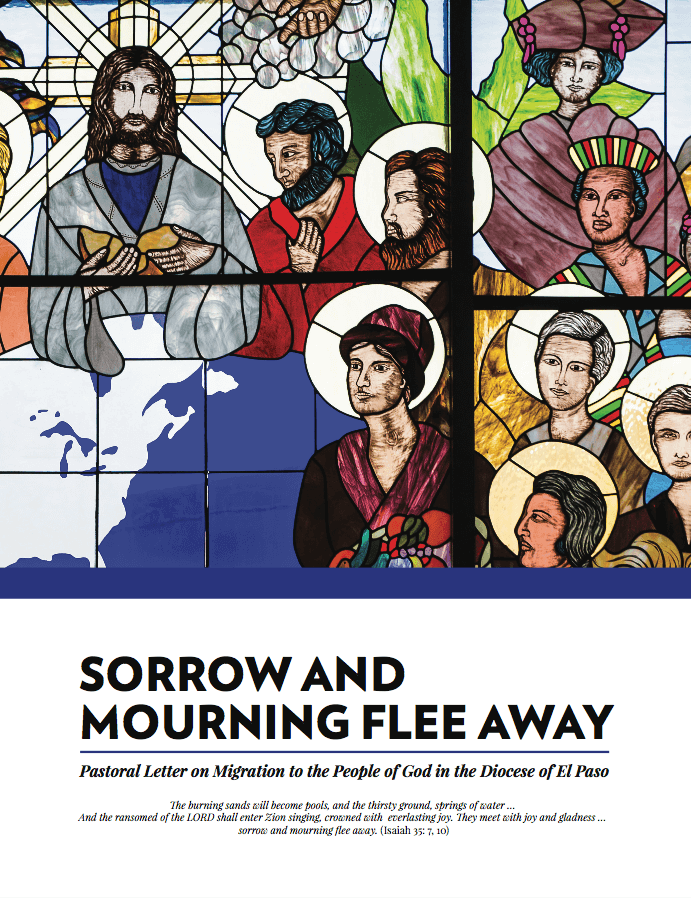 Bishop Seitz spoke directly to examples from a broken immigration system, and emphasized the need to respond as a Catholic community to “do all we can, as Pope Francis has called us; to accompany people in these struggles.”

Throughout the pastoral letter text, a number of specific diocesan initiatives are introduced, including (1) initiating a “commission on migration” comprised of both priests and lay leaders; (2) establishing the Soñador Fund, providing Catholic school scholarships to Dreamer children, who Bishops Seitz referred to as the “most innocent among the innocent;” (3) establishing an extensive leadership formation program in migrant ministry and immigration advocacy, including a rapid response program; (4) development by diocesan attorneys of a policy memorandum for all parishioners advising on legal rights should immigration enforcement officials approach parish; and (5) a call for a moratorium on detention and deportation.

“It is not right to send people back into the situation they fled,” says Bishop Seitz, referencing countless cases of migrants who have come to the U.S. amid threats against their lives and the lives of their families. “This a ‘de facto death penalty’ for people who have crossed our border for refuge and asylum.” He emphasized that the U.S. helped write international asylum laws and expects other nations to uphold them, and our country’s responsibility to do the same.

Bishop Seitz shared the story of Carlos Gutierrez, a young man in his mid 30s, who is married with two young children. Eight years ago, he was a successful businessman in Chihuahua. A ruling gang began extorting funds from him and his businesses and Gutierrez came to point where he could no longer sustain payment amounts. On an outing with friends in a local park, Gutierrez was abducted and attacked with a machete, losing both legs. He survived, and fled as soon as he was able, arriving in El Paso. For last eight years, has been in the process of seeking asylum, but has not yet legally received it. “What is wrong with a system that would send a man back who has lost both of his legs to the place where they did that to him?” asks Bishop Seitz. “This is clearly a broken system.”

He also emphasized the gifts of migrants to the diocese and El Paso community, and the peaceful, loving, hard-working, faithful, community-oriented culture embodied in migrant communities, allowing El Paso to be the safest city of its size in the U.S. “I feel so blessed to be here on the border with this migrant community,” he shared.

“Migrants on the border are being held hostage through rhetoric and action by politicians in faraway places,” said Dylan Corbett, executive director of Hope Border Institute, a community organization that seeks to bring the perspective of Catholic social teaching to bear on the social realities unique to the El Paso-Ciudad Juárez-Las Cruces region through a robust program of research, reflection, leadership development, advocacy and action. “Today’s signing and celebration affirms the value of our identity as a border community and the contributions of migrants, while serving as a protest against demonization of migrants and migrant communities and militarization of the border.”

Speaking on the proposed border wall and increased militarization of the border, Bishop Seitz expressed grave concern that additional wall construction would continue to push migrants into the most dangerous border areas where enforcement is not as strong—increasing the number of individuals who lose their lives attempting to seek asylum.

“Start with the Gospel,” said Bishop Seitz to the assembled leaders in immigration and media. “There is so much richness that calls us beyond those things that would divide us.” The call to open the doors of communication between Anglo communities and the immigrant community is imperative. “We need to open up the doors, find structures that bring communities together. Worship together, gather for meals. Once you accomplish that the whole narrative changes.”