Lessons within Reach: The Space Between Truth, Social Justice, and What it Means ‘to be Maligned’

You are here: Home1 / Events2 / Lessons within Reach: The Space Between Truth, Social Justice, and What it Means ‘to be Maligned’3

Lessons within Reach: The Space Between Truth, Social Justice, and What it Means ‘to be Maligned’ 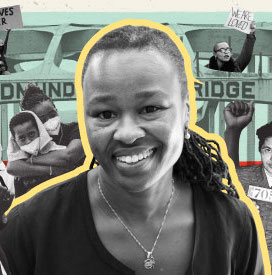 Antoinette Jackson, Ph.D., professor and chair of Anthropology at the University of South Florida (USF) in Tampa and director of the USF Heritage Research Lab, will deliver the 2021 Humanities Symposium virtual keynote address on Thursday, March 11, at 7 p.m. via Zoom. The keynote titled, “Lessons within Reach: The Space Between Truth, Social Justice, and What it Means ‘to be Maligned’,” will address Dr. Jackson’s experience with the Boot Hill Cemetery Project that inspired Colson Whitehead’s Pulitzer Prize-winning novel and this year’s Symposium text, The Nickel Boys. A Q&A session will follow.

The keynote address is free and open to the public, but registration is required.

Dr. Jackson, who has completed many research projects with undergraduate and graduate students in the United States and Caribbean, earned her Ph.D. in Anthropology from the University of Florida. She holds an MBA from Xavier University in Cincinnati and a Bachelor of Arts in Computer Science from the Ohio State University.

Dr. Jackson, whose work on heritage has been widely published, is the editor of the journal Present Pasts and the author of Speaking for the Enslaved—Heritage Interpretation at Antebellum Plantation Sites (Routledge, 2012), and Heritage, Tourism, and Race—the Other Side of Leisure (Routledge, 2020).

Colson Whitehead’s The Nickel Boys traces the life of an African American teenager named Elwood Curtis before and after he is sent to the Nickel Academy (based on the real-life Dozier School) in Florida—a reform school where staff members brutalize the “students.” Growing up in the late ‘50s and early ‘60s, Elwood is an idealist, an acolyte of Martin Luther King, whose principles get him into trouble at Nickel. He meets another young man named Turner, whose credo is “go along to get along.” Their world views collide but eventually merge. This is a novel about American racism that remains highly pertinent today.

This event will be captioned. If you require additional accommodations, please contact Disability Support Services at dss@loyola.edu.