Stop the Inhumanity! Catholic organizations are organizing a nonviolent campaign to end the traumatizing abuse of immigrant children and their families by the U.S. government. 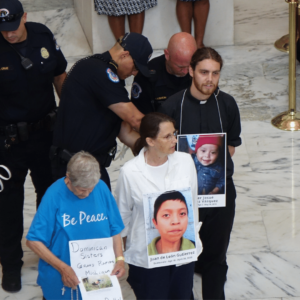 William Critchley-Menor, S.J., is arrested at the Catholic Day of Action for Immigrant children at the U.S. Capitol in July.

Join this national prayerful direct action in Newark, New Jersey from 10 AM to 12 PM on Wednesday, September 4, 2019. National organizations are partnering with local groups from New York and New Jersey, some of whom have been ministering to the people in detention and advocating on this issue for over 20 years. New Jersey has a Federal ICE office connected to the system of detaining children and the obstruction of reuniting children with their families. New Jersey also has four immigration detention centers, incarcerating as many as 2,500 people. While no children are in these facilities, the parents who have been separated from their children at the southern border are detained at these locations. This event is in anticipation of the Feast of the Nativity of Mary (Sept. 8th). To let organizers know that you are planning to attend the prayer service and/or participate in civil disobedience, please fill out this information form.

Anyone from around the country is invited to participate. The event will include prayer, ritual, and a call to action by Catholic leaders. Cardinal Joseph Tobin, Archbishop of Newark, has agreed to accompany the group. Because of the urgency and depth of the injustice, there will also be an opportunity for those who discern to engage in nonviolent action of civil disobedience.

This event follows a powerful mobilization of Catholic faith leaders to launch the campaign in Washington D.C., on July 18th and a series of weekly local actions throughout. With other coalition actions, this nonviolent action assisted in the release of over 2,500 children, emptying both Homestead, FL and Carizzo Springs, TX influx facilities. We will gather on September 4 to renew and amplify our call for this Administration to end the abuse, trauma, and detention of migrant children.

Would your community be willing to host a local solidarity vigil or mass on (or around) September 4th with those who will gather in Newark? If so, let us know it is taking place for registering your event vigil/mass here.

The following resources are available to organize local solidarity vigils/masses:

Please contact José Arnulfo Cabrera at jacabrera@ignatiansolidarity.net for more information or with questions.

Summer Social with the Jesuits in Kansas City