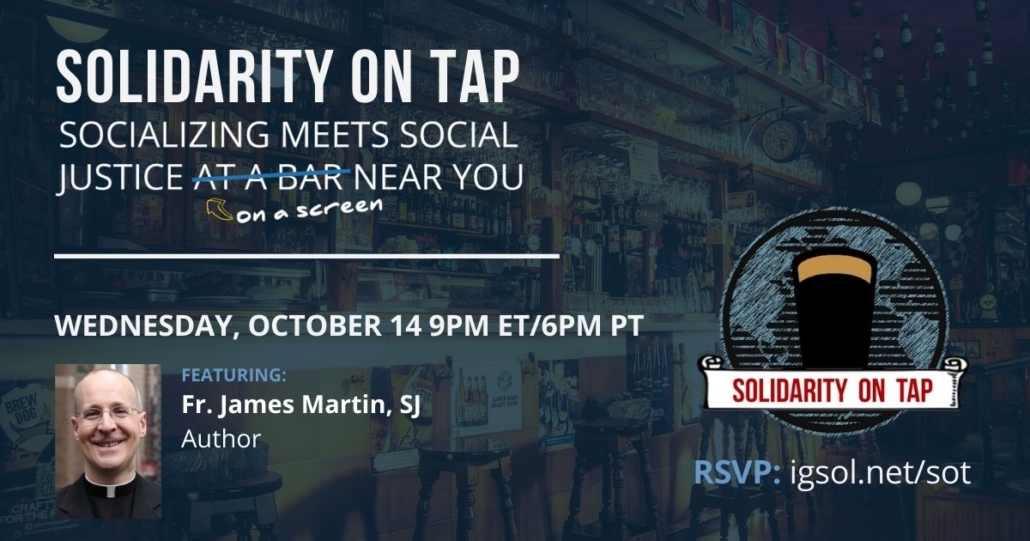 The Ignatian Solidarity Network invites you to virtual Solidarity on Tap with Fr. James Martin, S.J., on Wednesday, October 14th at 9PM ET/6PM PT. Enjoy fellowship and hear powerful reflections from members of the network engaged in work for justice—from a screen near you!

Learn more and RSVP at igsol.net/SOT

is a Jesuit priest, author and Editor at Large at America, the national Catholic magazine.

His most recent book is titled Building a Bridge: How the Catholic Church and the LGBT Community Can Enter into a Relationship of Respect, Compassion, and Sensitivity (HarperOne). He is a frequent commentator in the media about issues of religion and spirituality and is known for his appearances on The Colbert Report and his robust social media presence.

James Martin was born in Plymouth Meeting, PA, and was graduated from the University of Pennsylvania’s Wharton School of Business in 1982, where he received his bachelor’s degree in economics (B.S. Econ.) with a concentration in finance. After working for six years in corporate finance with General Electric in New York City and Stamford, CT, he entered the Society of Jesus (the Jesuits) in 1988.

Father Martin is the author of several award-winning books. Between Heaven and Mirth: Why Joy, Humor, and Laughter Are at the Heart of the Spiritual Life

Father Martin is also the author of: The Jesuit Guide to (Almost) Everything: A Spirituality for Real Life, My Life with the Saints, Seven Last Words; The Abbey; Jesus: A Pilgrimage; Together on Retreat: Meeting Jesus in Prayer; Becoming Who You Are: Insights on the True Self from Thomas Merton and Other Saints

; Searching for God at Ground Zero

(Sheed & Ward: 2002); In Good Company: The Fast Track from the Corporate World to Poverty, Chastity, and Obedience

(Orbis: 1999, 2009). He is the winner of a Catholic Press Association award. He is the editor of Celebrating Good Liturgy

(Loyola, 2004); and How Can I Find God?: The Famous and the Not-So-Famous Consider the Quintessential Question

(Liguori, 1997, 2004); and co-editor, with Jeremy Langford, of Professions of Faith: Living and Working as a Catholic (The Come & See Series)

(Sheed & Ward: 2002). His books have been translated into Spanish, German, Portuguese, Polish, Chinese, Korean, Hungarian, Lithuanian and Slovenian. His DVD “Who Cares about the Saints?” was released by Loyola Press in 2009, and many of his talks and lectures are available on the web.

For his various ministries, Father Martin has received an honorary Doctor of Divinity degree (D.D.) from Wagner College in New York 2007, and honorary Doctor of Humane Letters degrees (D.Hum.) from Wheeling Jesuit University in West Virginia and from Sacred Heart University in Fairfield, Ct., in 2010; from Le Moyne College in Syracuse in 2011; and in 2012 from St. Joseph’s University in Philadelphia, St. Louis University and Immaculata University in Immaculata, Pa. He has also received Fordham University’s Gaudium et Spes Award, the Ignatian Volunteer Corps’s Madonna della Strada Award, the Loyola Institute of Spirituality’s Writers’ Award, and the Religion Communication Association’s Scholar of the Year Award.

Besides his editorial, publishing and media work, Father Martin has been invited by Catholic dioceses and archdioceses to address gatherings of clergy and laity, has spoken at colleges and universities across the country, has taught at Boston College’s Summer Institute, and leads seminars and directs retreats at retreat houses. On Sundays, he assists at the Church of St. Ignatius Loyola in New York City.

Religion and Race: The Future of Anti-Racism and the Catholic Church

Faithful Citizenship: Moral and Political Choices for Catholics in the 2020 Election
Scroll to top