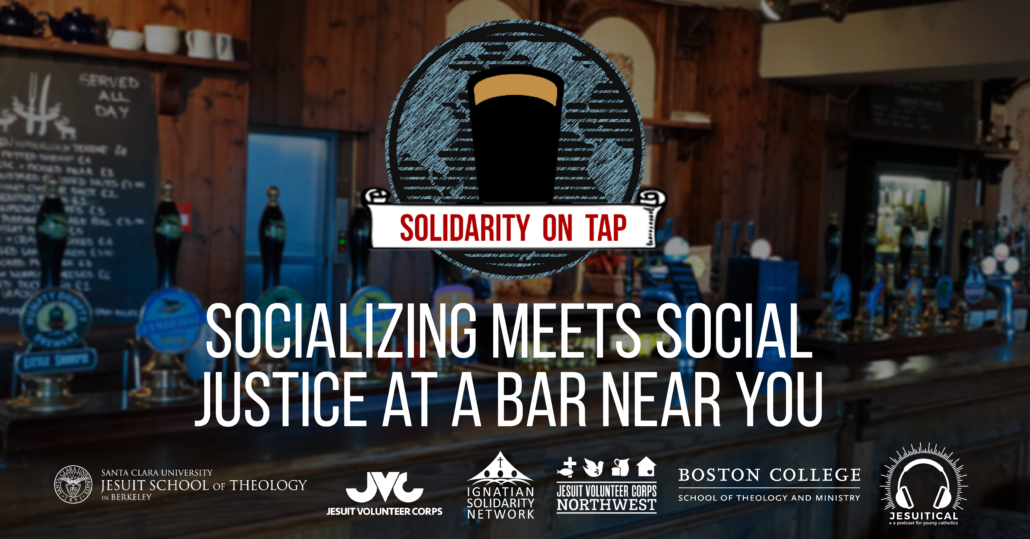 Solidarity on Tap is a simple gathering for socializing and social justice. The Ignatian Solidarity Network, Jesuit Volunteer Corps, Boston College School of Theology and Ministry, Jesuit Volunteer Corps Northwest, Jesuitical, Jesuit School of Theology of Santa Clara University, and Maryknoll Lay Missioners, along with Our Lady of Guadalupe Parish and other local partners welcome all to Solidarity on Tap | San Diego.

Food and beverages (alcoholic and non-alcoholic) will be available for purchase. All are welcome (21 and over).

Around 7:30 PM we will have a presentation titled, “Rise Up Industries — A Place to Belong” given by Joe Gilbreath, one of the founders of Rise Up Industries (RUI), and Ernie Garcia who was the fifth graduate of RUI’s 18-month Reentry Program.

Joe Gilbreath retired as a Corps of Engineers Army Colonel and is one of the founders of Rise Up Industries (RUI).

RUI is a non-profit focused on reducing street gang activity in San Diego County that was founded by Joe and other men who volunteered with Kairos International Prison Ministry (a non-denominational Christian based program) at the R.J. Donovan State Prison in San Diego after being inspired by a presentation made there by Father Greg Boyle. Fr. Greg is a Jesuit priest who founded Homeboy Industries 1992 in Los Angeles, widely recognized as the most effective gang intervention and reentry program in the world. After significant research, the RUI founders realized there was a need for a similar type program in San Diego.

San Diego has 110 gangs involved with human trafficking, with between 8,000 – 11,000 victims annually. There is also a reported connection between the Mexican drug cartels and San Diego street gangs, with an estimated $4.75 billion in drug trafficking annually. At-risk youth are being recruited into gangs as early as age 10! RUI minimizes gang involvement by providing integrated gang prevention, gang intervention, and post-detention reentry programs.

Ernie Garcia is the fifth graduate of RUI’s 18-month Reentry Program. RUI’s Reentry Program prepares its members for careers in the manufacturing industry by training them to be Computer Numeric Control (CNC) machine operators. Ernie has excelled in this field and received full-time employment with Computer Integrated Machining (CIM) immediately upon graduation. Ernie and three fellow RUI members, all of whom had life sentences, co-authored a book entitled Writing After Life. Each of the authors write about their youth, their incarceration and their reentry. Ernie has also been active in speaking engagements to raise awareness of the root causes of gang involvement and to assist youth in making positive life choices.