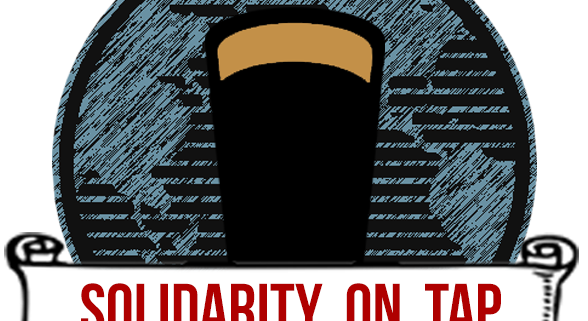 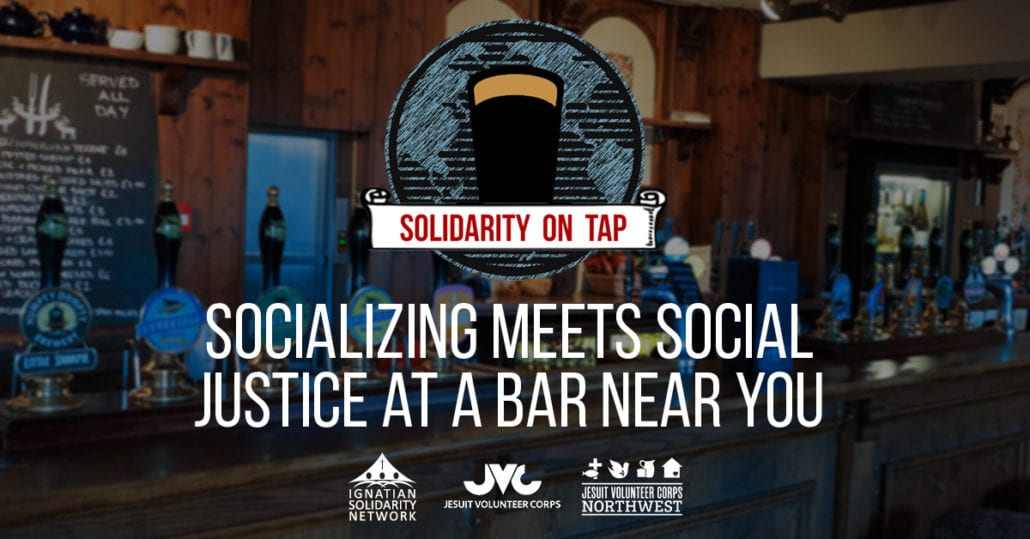 Solidarity On Tap is a simple gathering at a local pub for socializing and social justice. Jesuit Volunteer Corps, Jesuit Volunteer Corps Northwest, and Ignatian Solidarity Network along with local partners welcome those connected to the Jesuits and the spirituality of St. Ignatius of Loyola (FJV’s, Jesuit school alumni, Jesuit parish members, etc.) in San Diego. All Jesuit school alumni, Jesuit parish members, current & former Jesuit Volunteers, Ignatian Volunteer Corps members, Jesuit and Catholic institution staff, Jesuits, and friends of the Ignatian network are welcome (21 and over please!).
Around 7:30 PM we will have a reflection on the theme “Walking Together Toward a Just and Hospitable World” by Enrique Morones, Ph.D., Founder & Director of Border Angels.
RSVP via Facebook! Don’t have facebook? Email info@ignatiansolidarity.net
Solidarity on Tap | San Diego is sponsored by:
Ignatian Solidarity Network
Jesuit Volunteer Corps
Jesuit Volunteer Corps Northwest
Our Lady of Guadalupe Parish
The University of San Diego
Viainternational
SPEAKER BIO:
It’s harder to find a more passionate advocate for Latino issues in America than Border Angels founder Enrique Morones. Prior to this, he was the Vice President of Latino & International Marketing for San Diego’s professional baseball team – The Padres.
Since 1986, Enrique has dedicated his life to the prevention of thousands of migrant deaths that happen on the US-Mexican border. Inspired by his faith, and a chance meeting with Ethel Kennedy (the widow of Robert Kennedy), he has given a human face to countless migrants, offering them compassion in the form of food, water, clothing, education, and advocacy.
A proud American, and even prouder Mexican, he was the first person to gain dual-United States-and-Mexican-nationality in 1998.
In 2006, Enrique led a caravan of thousands of activists, protesters and ordinary American citizens across the country in the first “Marcha Migrante”, the event that sparked massive demonstrations across the country and the “immigrant spring”. A Marcha Migrante has been held every year since to educate and inform middle America of the plight of migrants while demanding humane immigration reform.
Enrique has been a constant face in the Media on all issues related to migration; and is the “go-to expert” whenever a major immigration issue faces America, from the aftermath of the firestorms in San Diego to the migration of refugee children in Texas from Central America in 2014. He has been featured by almost every major media organization nationwide, as well as locally including, but not limited to: The Today Show, Larry King Live, The O’Reilly Factor, Don Francisco’s “Sabado Gigante” and even taking the infamous Lou Dobbs to task for his anti-migrant prejudice.
Enrique has been acknowledged for his leadership both the public and private sectors, to advancing Latino culture and as a passionate advocate for human rights.
For more information about Enrique, please read his book “The Power of One: The Story of Border Angels”, co-written with Ricardo Griswold del Castillo PhD., published by San Diego State University Press or watch a short documentary by the University of San Diego after awarding him the Bishop Charles Francis Buddy Award for Contributions to Humanitarian Causes available here: https://youtu.be/Zesr6hNa6hU
About Border Angels
Founded by Enrique Morones in 1986, Border Angels is an all-volunteer, non-profit 501(c)(3) organization. Border Angels advocates for human rights, humane immigration reform, and social justice with a special focus on those issues related to Latino issues on the US-Mexican border. Border Angels core areas of focus are:
For more information visit www.borderangels.org