Laura M. Bohórquez García, a native from Mexico City moved to the U.S. at the age of four and was raised in Brewster, Washington a small rural agricultural town in Eastern Washington State.  Growing up Bohórquez joined her parents in immigrant rights rallies, conferences and in the packing sheds and orchards where her community, family, and herself worked. Through her experiences Bohórquez saw and learned the needs of the immigrant youth in her community and so Bohórquez’s passion for social justice and educational equity lead her to Western Washington University (WWU) where she received a BA in American Cultural Studies and Spanish. At WWU Bohórquez co-created the Raza Latina Studies Minor, participated in M.E.Ch.A and in the Washington Dream Act Coalition as well as  graduated as the “Outstanding Graduate” from the American Cultural Studies Department.  Her commitment towards the educational equity for undocumented peoples encouraged her to pursue her Master’s in Education from Loyola University Chicago where she implemented a safe space and ally training as well as participated in committees that work to implement and change the policy and practices that serve Loyola‘s undocumented students. Bohórquez currently dedicates her education to advocate for immigrant and educational rights for underrepresented and underserved communities. 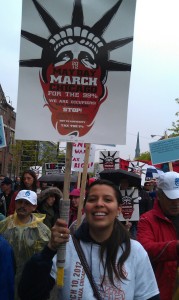