You are here: Home1 / Ignatian Family Teach-In for Justice 2016

Join 1,600+ members of the Jesuit network in learning, reflecting, praying, networking, and advocating for justice.

The Ignatian Family Teach-In for Justice (IFTJ) is an annual gathering for members of the Ignatian family (Jesuit institutions and larger church) to come together in the context of social justice and solidarity to learn, reflect, pray, network, and advocate together. It is a place where people are empowered, re-energized, inspired, challenged, and supported by a community that sees faith and justice integrally linked.

Now in its 19th year, the IFTJ has a rich history rooted in honoring the Jesuits and their companions who were martyred in El Salvador in 1989. 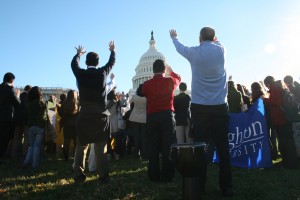 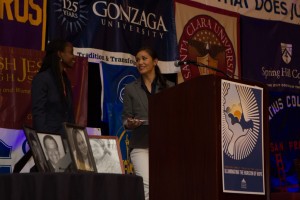 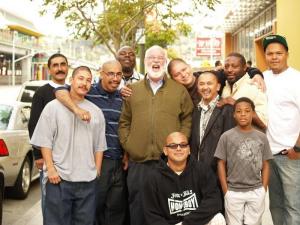 Father Gregory Boyle is the founder and Executive Director of Homeboy Industries, the largest gang intervention, rehabilitation and re-entry program in the United States, now it’s in 25th year.

A native Angeleno, Father Greg was ordained a Jesuit priest in 1984. He was transformed by his work in Bolivia, Mexico, and Folsom Prison with those who “live at the margins.” His dedication to finding a place for all in our society brought him to the Boyle Heights community of East Los Angeles, where he served as pastor of Dolores Mission Church, then the poorest parish in the city, from 1986 through 1992.

It was there that Father Greg started what would become Homeboy Industries, a nonprofit organization that employs and trains more than 300 former gang-members every year in seven social enterprises, from Homeboy Silkscreen & Embroidery to Homeboy Bakery and Homegirl Café. Now located in Downtown Los Angeles, Homeboy also provides a path to change and free, critical services to the 12,000 people who walk through the doors every year seeking a better life. Homeboy’s unique and innovative approach of on-the-job training in conjunction with essential wrap-around services, including mental health therapy, tattoo removal, and case management, has become a model for other organizations around the world.

Father Greg is the author of the NY Times bestselling book, Tattoos on the Heart: The Power of Boundless Compassion. His debut book has been honored by SCIBA (Southern California Indie Booksellers Association), Pen USA, Publishers Weekly, and Goodreads Choice Awards. He is currently working on his second book, Barking to the Choir: Now entering the kinship of God.

Father Greg has received numerous honorary degrees, awards and recognitions including the Civic Medal of Honor, the California Peace Prize, and in 2011 was inducted into the California Hall of Fame. He serves on the U.S. Attorney General’s (DOJ) National Task Force on Children Exposed to Violence, the Office of Juvenile Justice and Delinquency Prevention’s (OJJDP) National Gang Center Advisory Board, the CA State Commission for Juvenile Justice and Delinquency Prevention, the Loyola Law School Center for Juvenile Law and Policy (CJLP) Advisory Board, and the Regis University Board of Trustees.