On September 24, Pope Francis addressed a joint session of Congress in an historic event bringing together faith and politics.

Of Americans identify as Catholic

While Pope Francis will said goodbye to the U.S. in 2015, we want his message of solidarity to live on!

In partnership with the Jesuit Conference of Canada and the United States, we have created a platform where you can learn and take action on four key issues that we are working on today. Click on one of the four images to the right to take action now!

The Pope Goes to Congress

Pope Francis’s address to a joint session of Congress on
September 24, 2015 marked a first in the history of the Catholic Church and United States.

Invited by Speaker John Boehner, a Catholic and product of Jesuit education, Pope Francis spoke to a Congress where over 30% of members self-identify as Catholic and nearly 15% attended a Catholic college or university.  In addition, 50+ of the members were educated at Jesuit universities or high schools.  During his address to Congress he invited legislators to reflect on the U.S.’s response to those who are marginalized by poverty and injustice, especially migrants, those plagued by climate change, workers treated unjustly, etc.

Scroll down to view the recording of the address and find additional Pope Francis resources.

Recording of the Pope’s Address:

View the full text of the Pope’s address 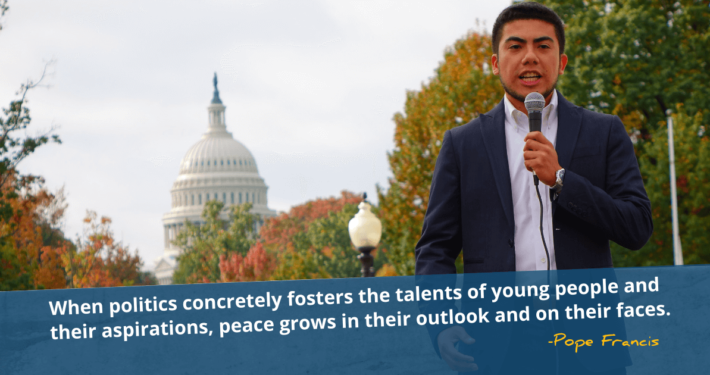 On January 1st, 2019, Pope Francis will mark the annual World Day of Peace by sharing a message titled: “Good Politics is at the Service of Peace.”