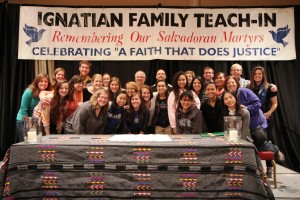 Creighton University at the 2012 Ignatian Family Teach-In for Justice

WASHINGTON, DC – “Imagination Reform” was the theme of the 15th annual Ignatian Family Teach-In for Justice (IFTJ) attended by Creighton University.  The national conference for those passionate about social justice grounded in the Catholic Social Teaching and the spirituality of St. Ignatius of Loyola, took place November 16-18, 2012, in Washington DC.  The Creighton University group joined approximately 1,000 other attendees from more than fifty Jesuit and partner institutions in twenty different U.S. states.  The Teach-In was sponsored by the Ignatian Solidarity Network.

Reflecting on the 15th annual teach-in, Christopher Kerr, Ignatian Solidarity Network executive director said, “This year’s teach-in embraced the true spirit of the Ignatian Solidarity Network.  Attendees gathered with a strong desire not just to learn about injustice, but also seeking ways to be better connected with those facing and injustice and those who work for justice.  The energy surrounding Ignatian Family Advocacy Month in February 2013 is already building.  We look forward to continuing to work with the Creighton University delegation on this unique advocacy effort.”  Ignatian Family Advocacy Month, is a national advocacy campaign initiated by the Ignatian Solidarity Network which will focus on three priority areas: domestic poverty, humane immigration reform, and sustainable environmental policies.

The Teach-In theme “Imagination Reform: Moving Beyond the Margins” was introduced at the event by Jeff Peak, Assistant Director of Creighton University’s Center for Service and Social Justice.  Video of Jeff’s introduction can be found here.

The Ignatian Solidarity Network promotes leadership and advocacy among students, alumni, and other emerging leaders from Jesuit schools, parishes, and ministries by educating its members on social justice issues; by mobilizing a national network to address those issues; and by encouraging a life-long commitment to the “service of faith and the promotion of justice.”  ISN is an independent lay-led 501(c)(3) organization.  More information can be found at: www.ignatiansolidarity.net