…….. because they committed the heinous crime of loving the poor and believing in the dignity of the human person.

…….. because they believed in reconciliation and peace over violence.

…….. because they stood in solidarity with the poor and the oppressed.

READER:            Born in the Basque country of Spain, Ellacuria, 59 when he died, had arrived in El Salvador in 1948 as a Jesuit novice.  A gifted philosopher and political analyst, Ellacuria had been Rector of the University since 1979.  He had been calling for a negotiated solution ever since the war began in 1981.

READER:            Segundo Montes Mozo, 56, was born in Spain.  His majestic presence earned him the nickname Zeus.  He was head of the Sociology Dept. and Human Rights Institute.  People knew him as a gentle giant, who charmed, cajoled and encouraged the people of the barrio where he worked with them with great warmth.

READER:            Ignacio Martin-Baro, 44, was also from Spain.  He arrived in El Salvador in 1960.  He was Academic Vice-President, founder and director of the University’s public polling project, head of the psychology department and a prolific writer.  He is recognized as a pioneer thinker in social psychology. On weekends he would share the sacraments, play his guitar and give piles of candy to the kids at the parish in Jayuya.

READER:            Amando Lopez Qintana, 53, arrived from Spain in 1953 and was known as always jolly, smoking his pipe and smiling.  He taught Theology at the UCA and engaged in weekend pastoral work at the parishes around San Salvador.

READER:  Juan Ramon Moreno Pardo, 56, was born in Spain and was known to be shy and a versatile librarian.  Along with the others, with the exception of  Ellacuria, he gave himself to weekend pastoral work.  He also taught Theology to  the students of the UCA.

READER:            Joaquin Lopez y Lopez, 71, was the only Salvadoran Jesuit killed.  He was the son of a prominent family and was the only one who did not work at the UCA, which he had helped found in 1965, but rather in the Jesuit sponsored Fe y Alegria education project for the poor, which he had also helped to start in 1969.  He was affectionately known as “Lolo.”

READER:  Elba Julia Ramos, 42, was the wife of the caretaker, who lived with her husband and daughter in the caretaker’s cottage near the gate of the UCA. She asked the Jesuits if she and her daughter could take a room closer to the Jesuits’ house for security that night.  Her husband stayed home to secure their cottage.

READER:            Celina, 15 years old, a high school student, was the daughter of Elba and her husband, the caretaker at the UCA, and shared in martyrdom with her mother and 6 Jesuit priests on November 16, 1989.

READER:            Sister Ita Ford was targeted specifically by US backed Salvadoran death squads because she stood up to them in defense of the disappeared.  She told her sister: “If you could choose to enter into other people’s suffering, or to love others, you at least have to consent in some way to the possible consequences.  Actually what I’ve learned here is the death is not the worst evil.. We look death in the face every day.  But the cause of the death is evil.   That’s what we have to wrestle and fight against.”

READER:            Sister Maura Clarke spent seventeen years in Nicaragua working against the US backed Somoza dictatorship, before moving to El Salvador only months before her death.  “If we leave the people when they suffer the Cross, how credible is our word to them?”…she wrote only weeks before her death. She continued:  “The Church’s role is to accompany those who suffer the most, and to witness our hope in the Resurrection.”

READER:            Sister Dorothy Kazel joined the Cleveland Mission Team in El Salvador and was assigned to work in the parish of La Libertad with Jean Donovan.  Dorothy was beloved by one and all.  Feisty and lively and sweet.

READER:            Jean grew up in upper-middle-class Westport,  Connecticut, attended Mary  Washington College in Virginia,  spent a life changing year in Ireland, and tried to become an accountant.  Instead, she joined the Cleveland Diocese and Maryknoll Lay Mission programs to serve in El Salvador.  After several years, she found herself in the center of a war zone.  And more often than not, she and the others spent their days picking up the murdered bodies left along the road.  “People are being killed daily,” she wrote a friend in May, 1980……”everything is hitting so close now.”

READER:            Dean Brackley was born in upstate New York, joined the Jesuits, and taught at Fordham University in New York in the 1980’s.  After graduates of the School of the Americas killed six Jesuit priests and their co-workers in El Salvador in 1989, Brackley volunteered to take the place of one of the martyred Jesuits. He joined the staff of the UCA and did pastoral work in a poor urban community in San Salvador. He invites all of us to form a new generation of international solidarity, to be people who live for others, especially the crucified majorities in countries like El Salvador – and the crucified people on the margins everywhere.  He died on Oct 16 of last year from cancer.

Camden has seen an unprecedented murder rate in 2012…[it’s the] highest murder rate in the country and this is the deadliest year on record. If New York City had the same murder rate, there would be 5,654 people dead — twice that of the World Trade Center bombings…The rate of violence here is extraordinary…And yet, there is little outrage about Camden. It is rarely mentioned neither in the news nor by our political leaders at a local, state, or national level. The difference is that unlike New York, Chicago and many other big cities that face violence in the streets, the entire city of Camden is poor….As long as that continues, Camden, and America at large, are no better than the Penn State football coaches who remained silent in the face of ongoing abuse in the Nittany Lions locker room. We know and can attest to the terrible violence being done here, yet the silence perpetuates and deepens its effects. In Camden, we have been planting wooden crosses to remember each of the murder victims. While they are physical representations of the trauma, they do not tell the whole story. It extends to every person who visits them mourning for a lost one and every person who is touched by this unnecessary reality. The crosses break the silence and allow a process of healing to begin simply by acknowledging the pain that exists. It is a small first step that is intended to catalyze many more…”

We remember these and all those who have lost their lives.  Amen. 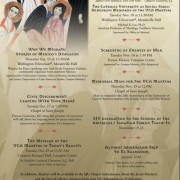 20th Anniversary of the UCA Martyrs Calendar of Events (SJU) 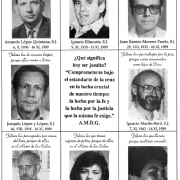 Evening Prayer in Memory of the UCA Martyrs