UNIVERSITY HEIGHTS, OH – As the global community prepares to celebrate the 1-year anniversary of Pope Francis’s groundbreaking encyclical Laudato Si’: On Care for Our Common Home on June 18, the Ignatian Solidarity Network affirms the efforts of Jesuit and partner institutions to respond to Pope Francis’s challenge to “care for our common home.” Over the past year, the Ignatian network has demonstrated a deep desire to respond through education, prayer, and action, which counter the challenges facing all of humanity in the form of climate change. 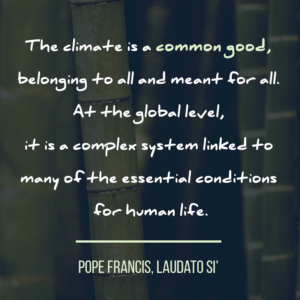 A full listing of efforts by Jesuit ministries across the U.S. and Canada during the past year can be found here.

“Last June, Pope Francis offered the world an invitation to be people of solidarity as stewards of our Earth,” said Christopher Kerr, executive director of the Ignatian Solidarity Network. “As a network, grounded in faith, we have begun to respond to this call through prayer, reflection, and action. There is much work to be done, but there is much to celebrate on this 1-year anniversary.”

These efforts began even before Laudato Si’ was released, when a large number of Jesuit colleges and universities organized communal prayer services and campus masses, on or around the release date of the encyclical.

Later in the summer all 28 Jesuit college and university presidents joined more than 100 Catholic higher education leaders across the globe as signatories of a statement in support of Pope Francis and his encyclical. Representing over 30 nations, the leaders committed to work collaboratively “through all the means available to and appropriate for [their] colleges and universities as institutions of higher learning, to study, promote, and act on the ideals and vision of integral ecology laid out by Pope Francis.”

At Bellarmine Chapel, a Jesuit parish in Cincinnati, Ohio, parishioners formed a “Healthy Earth Team” that has created a community garden, collected over 1-ton of e-recycling, distributed over 70 apple trees and 400 milkweed seed packets, begun launching a monthly Meatless Monday Meetup series, and formed a book group around Naomi Klein’s This Changes Everything.

Seeking to unite members of the Ignatian network at the secondary education level, the Ignatian Solidarity Network partnered with three teachers at Cheverus High School in Portland, Maine, to establish the Ignatian Carbon Challenge.

The Challenge invites both individuals and secondary education institutions to address climate change and environmental justice through a series of monthly challenges. Officially starting in September, the program will run through the 2016-2017 school year, and the program is open to any Catholic high school. Nearly 20 high schools across the U.S., Australia, Canada, and Venezuela, have already committed to participate in some capacity.

“The Ignatian Carbon Challenge creates opportunities for students, faculty, administrators, parents, and alumni to join together, not just within their school but across the country to respond to Pope Francis’s prophetic call to ‘care for our common home,’” said Kerr. “Working as a network, our individual and institutional actions will collectively have a significant impact in responding to this call.”

The Ignatian Solidarity Network (ISN) is a national social justice networking, education and advocacy organization animated by the spirituality of  St. Ignatius of Loyola and the  witness of the Jesuit martyrs  of El Salvador and their  companions. ISN was founded in 2004 and is a lay-led 501(c)3 organization working in partnership with over 80 Jesuit universities, high schools, and parishes, along with many other Catholic institutions and social justice partners.

To Those Who Preach Homophobia: An Open Letter In the Wake of the Orlando S...
Scroll to top
Shares
Share This