Blog - Latest News
You are here: Home1 / Jesuit Volunteer Reflects2 / Rising from the Ashes of its Industrial Roots: Accompaniment in “America’s... 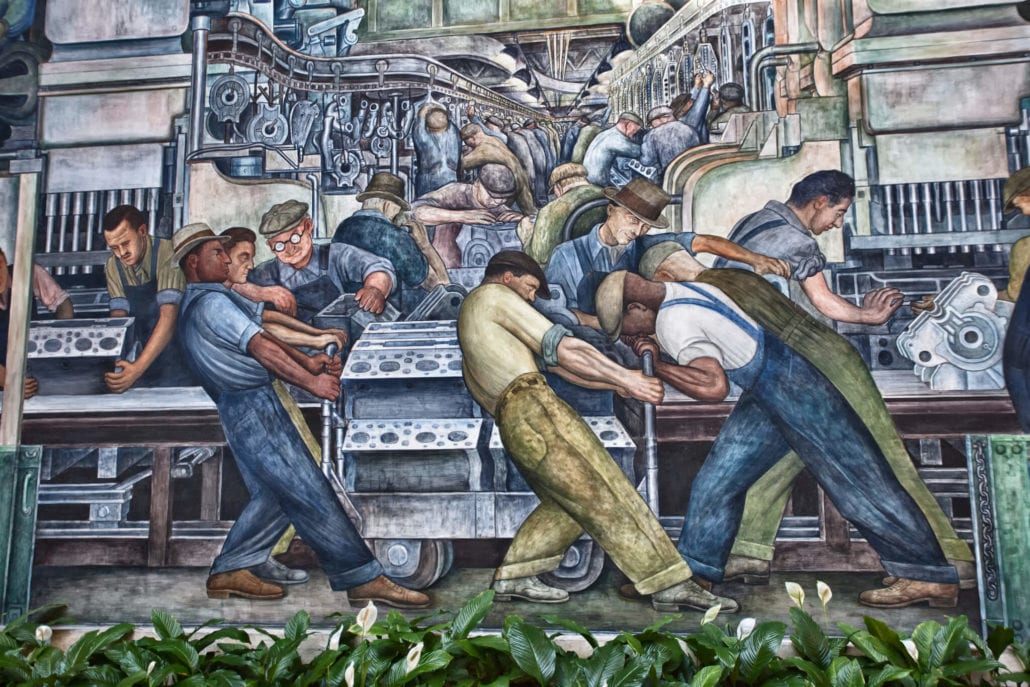 Prior to arriving in Detroit, I was under the assumption that my adopted city was a metropolis in shambles—void of street lights, public safety presence, trash pick-up, and all of the necessities most in the U.S. take for granted.

During the introductory tour of my placement city, I was deeply shaken by how someone generally aware of world events like myself could develop a single story of Detroit, failing to capture the complexities that media coverage and, even, nonfiction books would shortsightedly omit. Where mainstream society glosses over, however, the Jesuit Volunteer Corps exposes young adults to the realities of communities on the margins – a truth that comes to life at our agencies. 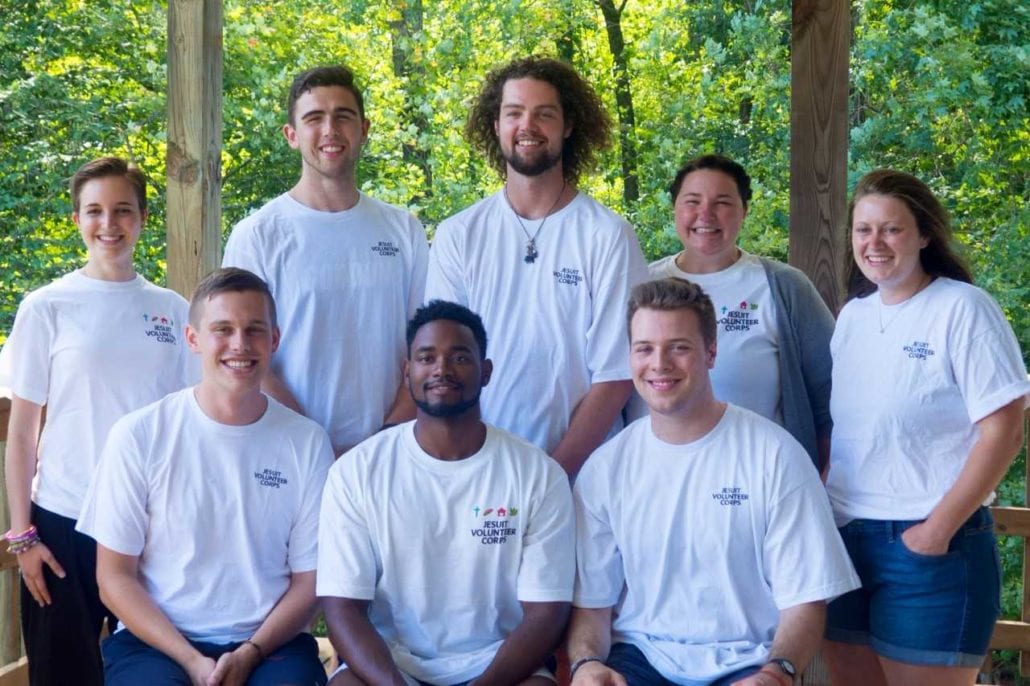 I never considered that I might encounter an entirely novel mode of medical care at the Mercy Primary Center, a place where the patient is treated holistically, receiving wrap-around care. This means East Side Detroiters, among others, can receive your typical health services through a physician’s care and fitness programming, such as yoga and pilates. Preventative means are taken, too, through health, education, nutritional instruction and lifestyle recommendations. In addition, the community’s basic needs are met in the form of a food pantry and hygiene station. “That sense of relationships has been the most life-giving part of my job,” said associate and housemate Mandy Lang. “Just feeling like myself and my patients, we’re accomplishing things together, and managing the resources available to us in Detroit.”

I never considered a racquet sport like the tennis I grew up playing could manifest in Detroit in the indoor machination that is Squash. At RacquetUp! Detroit’s 5th-12th grade population is stimulated with an after-school youth development program unrivaled in originality and ingenuity. Sure, you could find students volleying away on the Northwest Activity Center courts. But more importantly, Detroit’s youth are afforded the chance, at RacquetUp!, to further their respective academic careers with study halls, standardized test prep and even museum trips and college visits. “We’re able to take them to places outside of Detroit, too, and get the kids outside of this local world and expose them to other things going on in the country,” associate and housemate, Eric Knapke said. Tournaments are held in cities as close as Cleveland and Chicago, and as distant as New York and Boston.

Let’s take a drive down McNichols Rd. to the University of Detroit-Mercy where we will discover a Jesuit school’s campus ministry department concerned with issues not solely local but all that which clouds 2018 America—immigration legislation and mass incarceration. A group of students and Detroit Jesuit Volunteers made the 9-hour van drive to Washington, D.C. for conversation, education, and advocacy on Capitol Hill at the Ignatian Family Teach-in for Justice. “I was hoping that the conference would spark a specific passion toward a specific injustice for [these students],” university minister and housemate Heather Huguet said.

As we veer down Michigan 10 South and approach the postmodern-influenced window-laden Cass Technical High School, we find ourselves face-to-face with the Motor City’s housing “Promised Land”—United Community Housing Coalition. Here, tenants who desire to hold onto their home with the looming threat of eviction or who seek relocation funding acquire peace of mind and a roof over their heads through legal defense. Every other Thursday, UCHC takes on five new cases during intake, despite the bleak reality that 70+ respective clients line 2nd Ave. in hopes of receiving legal assistance. “It’s easy to be like, ‘Oh, wow, that’s crazy. They have a bunch of abandoned houses.’ And then, you think about the houses that aren’t technically abandoned, and that’s who we’re dealing with, and that’s who I see every day,” paralegal and housemate Richie English, said.

Housemate and fellow paralegal Michael Ames echoed English’s bewilderment. “It’s kind of odd working in the legal system, trying to do social justice work and encountering a lot of injustice in that work I’m trying to do.”

Traversing through the spiderweb that is Detroit’s city-spanning interstate-highway-dominated infrastructure (six circumvent the Motor City), we transition from law to schooling, specifically for those who never had a chance to finish theirs, due to life circumstances. At Mercy Education Project, adult women of 18-65 years of age take language arts and math classes in hopes of earning their G.E.D. Many are parents, work multiple jobs, and have to overcome obstacles in tasks as basic as securing transportation to school. Yet, there are many success stories. “Some of the women want to go to college after getting their GED, some just want the GED just to have it, others want to get promoted because they can’t get a better job without having a GED,” Samantha Fazekas, teacher and housemate, said. “Some want to go to college and then pursue careers, or open their own businesses, like restaurants and hair salons.” 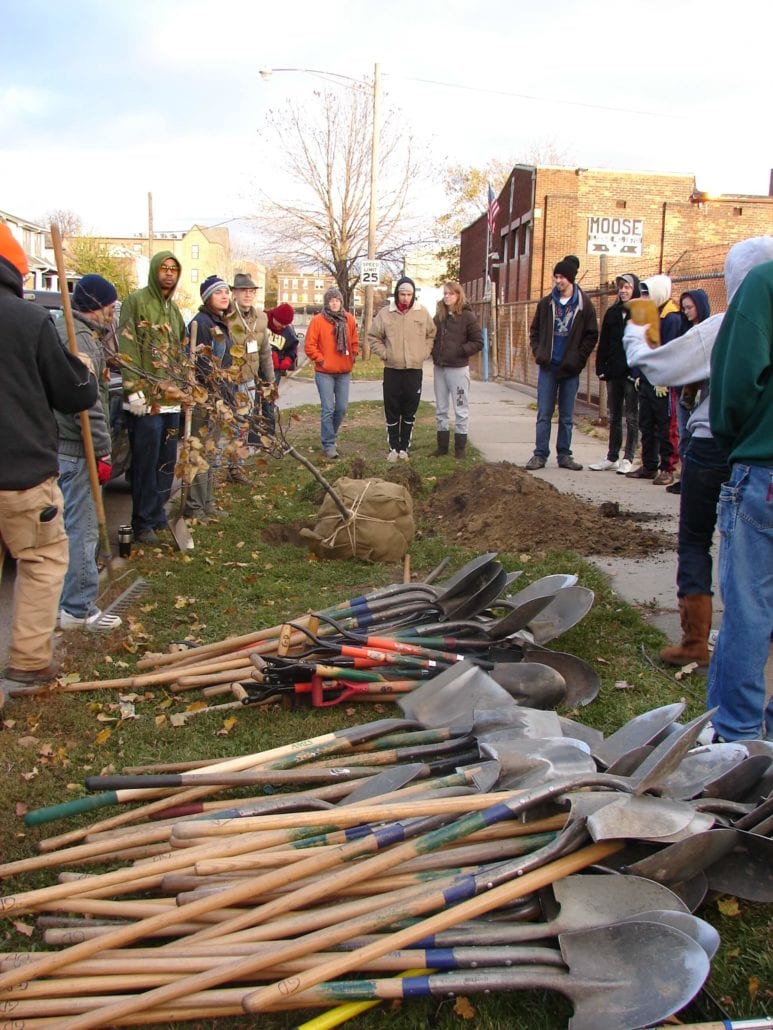 West Side Industrial district’s factory-lined streets are traded for mid-20th-century bungalows in the Southwest neighborhood, Springwells Village, home to one of Michigan’s largest Hispanic/Latinx population and community organizing nonprofit, Urban Neighborhood Initiatives. Green spaces make themselves known in the most unassuming of nooks and crannies. Fire hydrants are transformed into works of art. Parks replace abandoned lots. Playgrounds occupy the collective imagination of the neighborhood youth. “It’s really cool to see nonprofits and community members working together to create a neighborhood they love and feel safe and play in. It’s not necessarily in the nicest part of town but there is a lot of pride,” volunteer coordinator and housemate Gunnar Hamina said.

Finally, we make the ten-minute bike commute to Mexicantown proper. Here, we will discover a college-prep Catholic high school funded by its 350 student-interns who trade one school day per week for their Corporate Work Study Placement at organizations like GM, Detroit Edison Co., Ideal Steel, St. John’s Hospital, law firms, and other white-collar work sites that dot Detroit’s skyline. Detroit Cristo Rey High School takes some of the city’s most motivated 14 year-olds, and churn out college acceptances for each graduating senior. 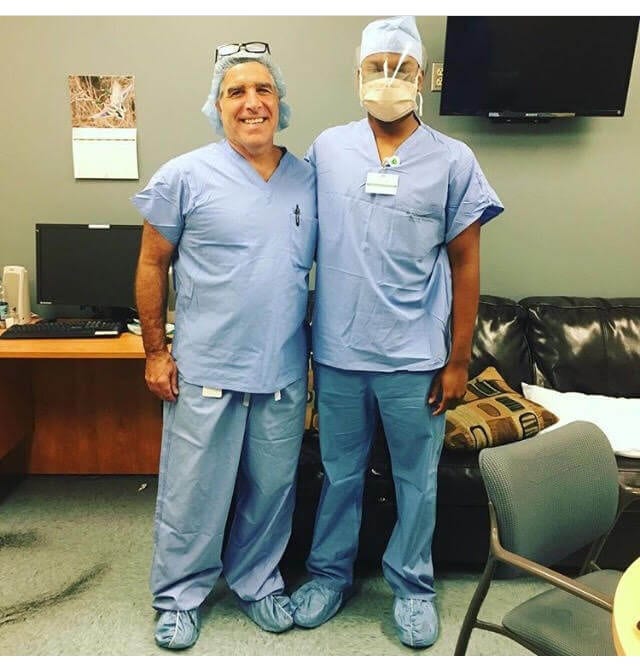 I never considered the possibility that I could accompany students who desire a future as bright as I once envisioned, and the reality that walking alongside an 11th grader in their college discernment could be that very “bright future” made manifest. As an overextended 11th grader at a suburban public school in Rhode Island, I only knew that Detroit was the “Motor City,” home to the Tigers, Lions, Pistons, and Red Wings, and among America’s most dangerous cities. I never considered the truth that Detroit is, perhaps, America’s most hopeful city, littered with opportunity for actualization from within. Just ask DCRHS senior, Qortez Brown, an intern at the 3rd Circuit Court in downtown Detroit. “My senior year, first couple weeks, they sat me down again and said, ‘Qortez, we have an opportunity for you.’ And, keep in mind, that word ‘opportunity’ popped up three times in three years. Since sophomore year, that was the central question to unlock.” From his work at Cooper-Standard Automotive to shadowing a surgeon at St. John’s Hospital, the nuggets of success that were once so elusive for the diligent senior are now appearing right at his doorstep.

I never considered that maybe opportunity exists not in what we, as volunteers, bring with us to our respective communities but rather, in the diverse organizations we are only exposed to through work in a city as complexly original as Detroit. 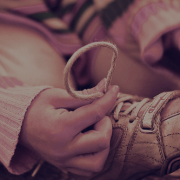 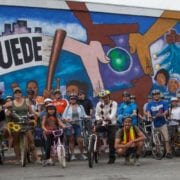 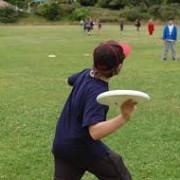 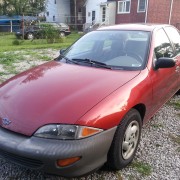 Homeboy Industries serves as the foundational rung of Maslow’s hierarchy of needs that catapults young adults to the university experience they were destined for. END_OF_DOCUMENT_TOKEN_TO_BE_REPLACED

"I had longed to find a community in the Church rooted in social justice, a community committed to bearing witness to the injustices of our world." END_OF_DOCUMENT_TOKEN_TO_BE_REPLACED

How might I show up to service every day feeling as if I have a limitless supply of socks—even when I may not? How can I constantly return to a place of abundance, even in the midst of what feels like scarcity? END_OF_DOCUMENT_TOKEN_TO_BE_REPLACED

Every American has some form of access to education, but most Americans do not know what it’s like to be a gang member—this is where Homeboy Industries comes into the picture. END_OF_DOCUMENT_TOKEN_TO_BE_REPLACED

A Jesuit Volunteer serving in the dormitory of a high school for Northern Cheyenne and Crow students in rural Montana considers the concept of "home." END_OF_DOCUMENT_TOKEN_TO_BE_REPLACED

Whether engaged in the building of a relationship or a kitchen table, I have found sustenance in a disciplined presence to the building itself. END_OF_DOCUMENT_TOKEN_TO_BE_REPLACED

A student spoke solemnly to me. Over winter break, the community in Ashland, Montana had experienced the abrupt death of two teenagers. END_OF_DOCUMENT_TOKEN_TO_BE_REPLACED

I find that wholeness is embodied by young people who are brave and resilient, honest and vulnerable, and who continue to grow and persist even in the face of more than I could handle. END_OF_DOCUMENT_TOKEN_TO_BE_REPLACED

These men and women have endured so much in their lives, and here they are, growing together. It was such a cheesy metaphor in my mind for my upcoming year with JVC. I want to release my apprehensions, fears, and grow together with my community. END_OF_DOCUMENT_TOKEN_TO_BE_REPLACED

Camaraderie With Fellow Pilgrims
Scroll to top
Shares
Share This