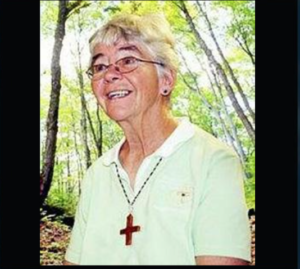 Sr. Dorothy Stang was born in Dayton, Ohio, where she lived as one of nine children in a traditional Catholic household. She joined the Sisters of Notre Dame de Namur community in 1948 and professed final vows in 1956. As a sister, Sr. Dorothy served many elementary schools and parishes in the U.S. before taking her ministry to Brazil in 1966. There, Stang worked with the Pastoral Land Commission, an organization of the Catholic Church that fights for the rights of rural workers and peasants, and defends land reforms in Brazil. Because of her impactful work, she was named “Woman of the Year” by the state of Para for her work in the Amazon region. She also received the Humanitarian of the Year award from the Brazilian Bar Association for her work helping the local rural workers.

In February of 2005, in Brazil’s Amazon rainforest, Sr. Dorothy was walking down a dirt path when she was shot and killed by hired gunmen. Her murder had been planned by powerful Brazilian landowners who wished to put an end to her advocacy on behalf of local farming families. She dreamed that the people of Brazil could one day live self-sufficient lives and use their land sustainably. She devoted 40+ years to her work. Sr. Dorothy has been formally recognized by the Vatican as a martyr.