You are here: Home1 / Standing in Solidarity: Catholic Bishops on US-Mexico Border

Join U.S. Bishops on the Border in Solidarity with Immigrants 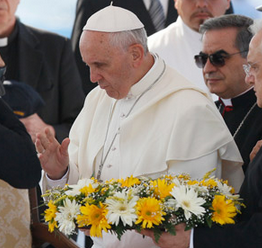 The U.S. Conference of Catholic Bishops (USCCB) Committee on Migration, joined by bishops on the border, will travel to Nogales, Arizona, March 30-April 1 to tour the U.S.-Mexico border and celebrate Mass on behalf of the close to 6,000 migrants who have died in the U.S. desert since 1998.

The purpose of the trip is to highlight the human suffering caused by a broken immigration system, an aspect of the national immigration debate which is often ignored.  Cardinal Sean O’Malley and the Bishops’ Committee on Migration will spend time with migrants served at the Kino Border Initiative‘s Care Center for Deported Migrants in Mexico before crossing back over to Nogales, Arizona on April 1, 2014 to hold a Mass of Repentance at 9 AM PT / 12 PM ET.

The trip follows the example of Pope Francis, who, in his first trip outside of Rome, traveled to the Italian island of Lampedusa to remember African migrants who died attempting to reach Europe. During that trip, Pope Francis spoke about the “globalization of indifference” toward migrants and decried the “throwaway culture” that disposes of human beings in the pursuit of wealth.

WAYS TO BE INVOLVED…

To help us build the movement and share what is happening across the country, please let us know what is being planned at your parish, campus, etc.  We promise to tweet, post, etc. to share your great efforts for humane immigration reform!

“What we fail to remember in this debate is the human aspect of immigration ­– that immigration is primarily about human beings, not economic or social issues.  Those who have died – and those deported each day – have the same value and innate God-given dignity as all persons, yet we ignore their suffering and their deaths.”