Blog - Latest News
You are here: Home1 / Voices for Justice2 / Environment3 / “We Are Changing the World”: Gen Z & Climate Change

Editor’s Note: Ben Campion, a senior at Gonzaga College High School, gave the following speech at a September 20, 2019, Climate Strike prayer service for high school students in the Archdiocese of Washington. He will speak from the 2019 Ignatian Family Teach-In for Justice mainstage as an Ignatian Network Speaker.

Smile! We are changing the world right now and we are here to celebrate life!

It has fallen to our generation to preserve our fundamental right to life. But who are we? Gen Z is roughly defined as anyone born from 1996 to 2015 mainly because we don’t remember 9/11. Yup, we are defined by terror attacks, government disregard of privacy, and the longest war in American history. But we also grew up with the first U.S. black president, have led the March For Our Lives Movement, and most importantly we comprehend that climate change requires immediate action. This is not a Republican versus Democrat issue. This is entrenched power and money versus the entire world- issue!

Fossil fuel CEOs and executives have blocked climate action and sowed doubt in order to maintain their status quo. By not acting, we play into their hands by preserving their reality. They do not care about you and me but they do care about their profits. Oil and gas companies have spent over 2 billion dollars lobbying since 1998. Already in 2019, they’ve spent over 62 million dollars.

The fossil fuel industry is apart of something bigger. We live in a consumer economy and culture that places our value on how much we consume. Instead of working with the Earth and its communities, the only focus is to extract, buy, and throw away. This economy and culture has been a driving force in maintaining the most detrimental effects of climate change. This is a social justice issue and we must act now to help the poor and marginalized, those usually bearing the brunt of increased flooding, climate catastrophes, and drought.

We must switch from a throwaway culture to one focused on community. By completely altering our economic, political, and social institutions we can work together as human species to live in communion with the natural world whose dependence on which we are too scared to acknowledge. We must overcome ourselves to ensure everyone’s right to a dignified life. Laudato Si’ explains the deep connectivity between humans and the environment. This is similar to the Jesuit ideal of cura personalis—the development and education of the entire body. Since climate change has widespread effects, the solutions must target the entire body of our society and the Earth. We meet God through the sacrament of nature and have entered into a covenant with Him to be stewards. We have been given special dignity and the power of self-awareness to be the conscience and heart of the natural world. This requires living with each other in a “reduce, reuse, repair” society instead of a “make, take, waste” one.

A month ago, I would have told you that I cared about climate change, but that there are too many deniers—it’s impossible—somehow excusing myself to not act. I was a passive supporter of climate action. However, once I learned about the organizations and strikes led by kids younger than me, all excuses were washed away. Most importantly, I began to comprehend the heavy finality that people are dying and will continue to die. I was discouraged and did not know what to do, but now I have a purpose to create a livable legacy and the hope that we will do it. By fighting for something that matters, I am actually happy and excited each day. We are living in the moment—celebrating life by fighting for it. We are here to join in the hope, joy, and purpose of dedicating our actions to a greater good. Although we are never satisfied, we relish the pure vitality of fighting for our lives.

We must act with conviction: the urgency of our choices and the ferocity to make radical ones. So, today we strike because widespread nonviolent movements truly do have the power to enact change. In 1970 on the first Earth Day, 20 million people recognized the fragility and beauty of this planet so they took to the streets. We are a part of something much bigger than ourselves, but we must continue to add our voices to the increasing clamor for change. The power of mass non-violent demonstrations comes when seen from a great distance. It is not a single day and a single march. It is the constant and continuous fight of millions of people. Erica Chenoweth, a researcher at Harvard, studied over 300 mass movements and concluded that it only takes 3.5% of the population consistently active in protests to force tangible political change. For reference, Gen Z comprises 25% of the U.S. population. We need 11 million people in the streets by 2020 to enact real change. So today we strike, but November we will strike again, and on Earth Day we will strike even larger than before.

Not only must you show up but you must go home today and bring your excitement, hope, and vigor to your communities and ORGANIZE. The U.S. is the history of organizing. We organized into labor unions forcing no child labor laws and the 40-hour workweek. We organized into the civil rights and women’s movements, yet we still have farther to go. So go, organize your own smaller demonstrations, prayer services, and political actions. Get your institutions to divest from fossil fuels. Create a presence so when November comes around even more people want and choose to come.

Lastly, many of us will be able to vote for the first time in 2020. Besides public demonstrations and economic choices, the vote is our third tool in telling those in power what we need. Go vote for the leaders who understand the urgency we face and the scope of change needed. Get your friends to vote who normally “don’t do politics.”

Scientists tell us that by 2050 the world needs to have net-zero emissions. One tangible policy to vote for is the Green New Deal. The Green New Deal is a plan to tackle climate change and inequality by creating millions of high paying jobs in clean energy industries. This involves: converting our energy sources to all renewables, digitizing our power grid, upgrading each building to be energy efficient, creating a zero-emission transportation system, and building sustainable communities based around local resources. The Green New Deal will ensure a just transition through job training and employment opportunities in these sectors, especially for those who rely on jobs in the fossil fuel industry. By investing in people and their communities, our country can build an efficient and sustainable economy. By supporting our weakest members, we thrive. Gen Z will not be the last generation.

It is through your one-on-one interactions that you inspire. By explaining the real, tangible urgency of climate change to your communities, they, in turn, will spread the message of action and hope. This is a cultural shift and we must continue to act and speed it up because we have run out of time.

So smile! You are informed, passionate, young leaders of this world. And remember we have reached zero: ZERO EMISSIONS, ZERO EXCUSES, and ZERO TIME TO WASTE!

Ben Campion is a senior at Gonzaga College High School in Washington, D.C. He is an active member in the Peace Club and helped organize Gonzaga’s participation in the September 20, 2019, Climate Strike. 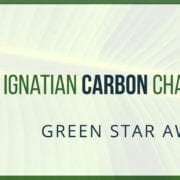 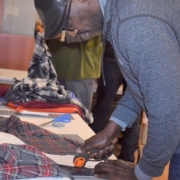 COVID-19: Bridging the Divide at the Father McKenna Center 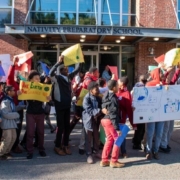 We Hear the Prophets