Reyna Montoya is the founder and CEO of Aliento. Reyna was born in Tijuana, Mexico and migrated to Arizona in 2003 fleeing violence. She is an undocumented/DACAmented social entrepreneur, community organizer, educator, and dancer. She is a 2016 Soros Justice Fellow, which enabled her to start Aliento. She is also a founding member of the first Teach for America DACA Advisory Board. She currently serves as a member of the Leadership Council of the ASU Lodestar Center for Philanthropy and Nonprofit Innovation. Reyna holds bachelor degrees in Political Science and Transborder Studies and a Dance minor from Arizona State University; she also holds a M.Ed in Secondary Education from Grand Canyon University. She recently completed an executive education program from the Harvard Kennedy School of Government. She has engaged in local, statewide and national platforms to advance justice for immigrant communities. In 2013, she was the lead organizer, who prevented an immigration bus of undocumented immigrants from deportation in Phoenix, AZ for the first time in the nation’s history. In the same year, with the help of the community, she stopped her father’s deportation. She was also recognized as 2017 #NBCLatino20. She is a 2017 Echoing Green Fellow and a 2018 Forbes: 30 Under 30 Social Entrepreneur. In 2018, she was recognized by Univision as one of the 15 Latinas currently transforming the world and was awarded as the 2018 Humanitarian Recipient for Spirituality by the Muhammad Ali Center. She hopes to share her talents and skills with the community to co-create healing spaces, political change, and leadership development of our immigrant youth and migrant families. 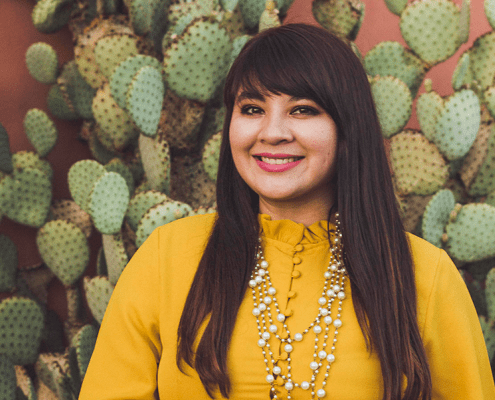