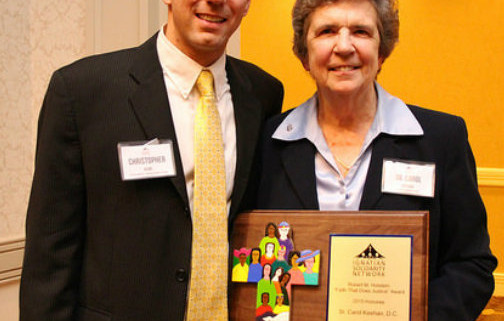 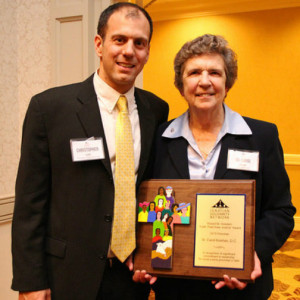 The Robert M. Holstein Faith Doing Justice Award recognizes individuals nationally each year who have demonstrated a significant commitment to leadership for social justice grounded in the spirituality of St. Ignatius of Loyola, the founder of the Society of Jesus (Jesuits). The award’s namesake, the late Robert (Bob) M. Holstein, was a former Jesuit, labor lawyer, fierce advocate for social justice, and co-founder of the Ignatian Family Teach-In for Justice, an event that is now the largest annual Catholic social justice conference in the United States.

“ISN is extremely appreciative that Sr. Carol has allowed us to honor her this year with our Robert Holstein award,” said Bill Hobbs, chairperson of the Ignatian Solidarity Network Board of Directors. Hobbs continued:

We live in a time and a society that is desperately in need of prophetic voices, who can speak to the injustices in our communities and our country. We also need those who are able to sit down at the table and be a voice of reason, promoting new insights and new vision, in a collaborative manner. With regard to health care in the United States, Sr. Carol has so ably filled both those roles. In her own way, with her own quiet voice, Sr. Carol has passionately lived a life of faith that seeks after justice. The Ignatian Solidarity Network is proud to call Sr. Carol a friend and colleague.

Sr. Carol Keehan, D.C., is the ninth president and chief executive officer of the Catholic Health Association of the United States (CHA). She assumed her duties as of October 2005. She is responsible for all association operations and leads CHA’s staff at offices in Washington, D.C., where she is based, and in St. Louis.

Sr. Carol worked in administrative and governance positions at hospitals sponsored by the Daughters of Charity for more than 35 years. Prior to joining CHA, she was the board chair of Ascension Health’s Sacred Heart Health System in Pensacola, Florida. Previously, she served for 15 years as president and chief executive officer of Providence Hospital, which includes Carroll Manor Nursing and Rehabilitation Center, in Washington, D.C.

Keehan has held influential roles in the governance of a variety of health care, insurance, and educational organizations. She had been a representative to the International Federation of Catholic Health Care Associations of the Pontifical Council for Pastoral Health Care. She serves on the board of Catholic Relief Services, Baltimore, Md. She has served on the boards of the Catholic Health Association of the United States, Catholic Healthcare Partners, Cincinnati; St. Agnes Hospital, Baltimore; Mercy Health System, Miami; Catholic Healthcare Audit Network, Clayton, Mo.; and SOAR! (Support Our Aging Religious). In addition, she has been a member of several health, labor, and domestic policy committees of the United States Conference of Catholic Bishops, Washington, D.C., and serves on the finance committee of the Archdiocese of Washington.

Her numerous awards and honors include the American Hospital Association’s Trustee Award; the Pro Ecclesia et Pontifice (Cross for the Church and Pontiff), bestowed by Pope Benedict XVI; and she was named in 2010 one of TIME magazine’s “100 Most Influential People in the World.”

The Ignatian Solidarity Network (ISN) is a national social justice network inspired by the spirituality of St. Ignatius of Loyola. ISN was founded in 2004 and is a lay-led 501(c)3 organization working in partnership with Jesuit universities, high schools, and parishes, along with many other Catholic institutions and social justice partners. More information about ISN can be found at: www.www.ignatiansolidarity.net. 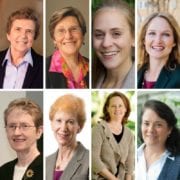 Catholic Women Leaders Speak Out Against “Toxic Politics of Fear” 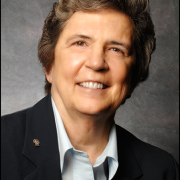 An Overlooked Injustice: Myths of Invisible Illnesses
Scroll to top
Shares
Share This