Fr. Fernando Cardenal, S.J., who led of life of advocacy and active commitment to the poor, died in February 2016. In his later years as a theology professor at the University of Central America Managua, Fr. Cardenal often spoke to U.S. student immersion groups visiting Nicaragua. The following is a transcript of some insights from Fr. Cardenal he often shared entitled “My Message to U.S. Students.”

The transcript was translated by Mark Lester, Regional Co-Director of Central America for the Center for Global Education, Augsburg College.

For 30 years I have been giving talks to young university students here in Nicaragua and in the United States. Because of that, I know you very well, but above all I have a lot of love for you, and that is why I want you to be very happy.

Reality teaches us that in your youth you freely choose to lead either a joyful life or a miserly life. You surely know examples of both cases. This is the dramatic reality about human freedom, and is one of the great attributes inherent to the human person. But it is also a dangerous attribute. We always have to make decisions about our lives.

The distinguished Greek philosopher Aristotle, before the time of Christ, in the first book that was written in humanity about Ethics, said that the purpose of ethics was happiness. In other words, that an honest life leads as a consequence to a happy life.

The great Indian poet and mystic Rabindranath Tagore wrote this poem: “I was asleep, and dreamt that life was happiness. I woke up, and I saw that life was service. I served, and saw that service was joy.”

After reflecting on these three statements of very wise people, you need to be very intelligent, to choose very well the path of your life, to build into your existence a great, authentic and profound happiness. In your life you have before you two paths: a happy life or a ruined life, lost forever. You have to choose.

If I use my watch to hammer a nail, I will completely destroy the watch. The watch is not made to do the work of a hammer. If I live in a selfish fashion, I will destroy myself just as the watch is destroyed. The human being is not created to be selfish, centered only in consumption, in the purely superficial pleasures that do not reach the soul. Only in love are we able to fully fulfill ourselves as human persons, simply because we are created for love.

In Boston College they told me that cats have nine lives. If we were cats, we could use the first lives to do stupid things, even to get involved in drugs and alcohol, it would not matter that these lives were destroyed, because other lives would come afterwards that I could live intelligently. But we are not cats. We only have one life. Let us live it with a lot of intensity, because it goes by quickly, and above all let us live it intelligently, in order to us build ourselves a life of happiness all the way to the end.

When I was studying in Mexico preparing for my ordination as a Jesuit priest, a classmate told me that he had visited a friend of his in the hospital who was seriously ill. The youth in the bed was looking at his hands and was rubbing them. His mother told him, “they are clean, don’t worry, we just cleaned them for you.” So the young sick man said to his mom, “that isn’t what I am concerned about. What really concerns me is seeing that I’m dying with empty hands, I haven’t done anything important in my life.” How sad it must be to die like that! You are young, but whatever day death comes for you, I hope it doesn’t find you with your hands empty. You have time to be filling your hands with very beautiful, important works, to the benefit of your families, your communities, your country, and also why not consider the entire world. Remember that joy is found in service. But never forget to serve the poorest, those excluded from society, those who have no future and their permanent state is hunger, pain and sadness without hope. Remember that the test on the last day of life, the great exam, the only subject matter it will have will be what we have done for the poor (Gospel of St. Matthew, chapter 25:31 and following).

In the Gospels the Greek word “ochlos” is used, which means: “poor or the poor multitude.” In the gospels of Matthew, Mark and Luke this term appears 126 times. This shows us the intensity of the work of Jesus with these people. We never see Jesus conversing with the high priests and priests of the Jewish religion, nor is he seen talking with the large landowners, he never appears in the cities of Sepphoris or Caesarea, the largest and most important of Galilee. He is only found walking through the towns of the poor peasants of Galilee, receiving the “Ochlos”, the poorest, those excluded from society, those who no one cared about, but Jesus taught them with his word and with his life that they were important for God, that he is merciful, compassionate and a forgiver of sins. He taught them that the best friends of God are the poor and the sinners. Jesus called this message “Good News.” The translation of the Greek word for this is “gospel.” This God incarnate in Jesus said, as a synthesis of his conception of life: “I have not come to be served, but to serve.” And he also said: “I tell you these things so that my joy might be in you, and that this joy might reach its fullness in you.” We will always find service united with joy, with happiness.

There is an experience that could happen to you in more or less 15 or 20 years from now. An adolescent son or daughter might come up to you and ask, “dad, mom, where were you in January of 2015?” “Where were you in May of 2017?” How sad it would be for you that if on that day you would have to say to your son or daughter, “I was not there!” And how sad that you would then hear from that son, that daughter, “what a shame dad, mom, it makes me sad to hear you. Were you not aware of anything, when on those dates there were thousands of young people struggling to build a more just, more human, more beautiful world?” In contrast, how marvelous it would be if that day you can tell them, “I was there with all those young people working for a better world.” And how beautiful and nice for you it would be to then hear your son or daughter say to you, “wow, I feel very proud of you! How I admire you!” This marvelous moment that could occur in a few years, you need to be preparing for now. 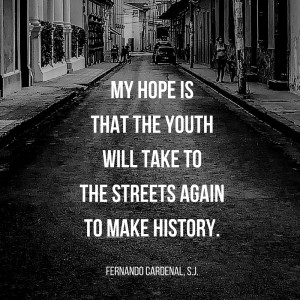 Three years ago while presenting the book of my memoirs in Spain, that had also been edited in Madrid, I was asked this question by a person in the auditorium in the city of Granada: “How can you be a man of hope after all the political disappointments that you have had in this last stage of your life?” I told him that my hope was not based on theories, but it was based on the youth. I have worked with them for 45 years, and I know very well all the enormous interior strength and great wealth that exists inside a young person. What I have to say comes from real life experiences, not stories, I have been there with them for years, and I have shared with them the marvelous works that they have done, on many occasions, even heroic works, for the transformation of society, in seeking a more just and caring world. And I told him this phrase, “My hope is that the youth will take to the streets again to make history.”

This phrase was published in a newspaper in the city of Granada, Spain. Later El Nuevo Diario published it in Managua. Later on the Jean Paul Genie Avenue in Managua a billboard was being prepared for commercial publicity – the frame was up with a sheet of flat zinc on it – and someone with black spray paint wrote on it, “my hope is that the youth would take to the streets again to make history. Fernando Cardenal.” It remained there for a year and a half. That is a very busy avenue and so thousands and thousands of Nicaraguans were able to see it. A friend of mine took a picture of the sign, framed it and brought it to my office. A young Spaniard who worked for two years as a volunteer in the University of the Jesuits in Managua saw the picture, returned to Madrid and some months ago wrote me an email that said, “I am in the streets of Madrid with the “indignados” making history.” We know that in many cities of Spain and in many cities of Europe and in many cities of the United States there are young people in the streets protesting over what the bankers are doing, making themselves even wealthier millionaires while the poor are losing their jobs and their homes. It is in youth like these that I have placed my hope.

Given that in a year and a half I will turn 80, I want to tell you that these things that I have been talking about are not highly worked theories from my brain, they come from pure living, it is my own life that I have placed before you, and I testify that in these 60 years I have of being at the service to others as a Jesuit, and in the 42 years I have of being at the service of the poorest of society, the “Ochlos,” I have found pure happiness. This has not been something passing, occasional, but for many, many years, it has been an ongoing experience! I want you to be very happy, with a profound and ongoing happiness, just as I have been happy. The issue at the heart of all my words in this message is happiness, this is the testament that I want to leave you: “my happiness,” that you might be very happy.

I say goodbye with a strong embrace full of respect and love, as well as a lot of hope. 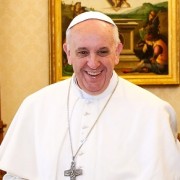 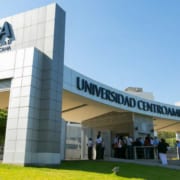 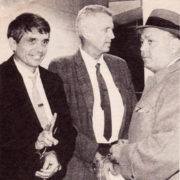 Success: To Be Just Half as Prophetic as Daniel Berrigan
0 replies