Brochure Brother is a short film created by LaDarius Torrey and John Dodderidge, students at Georgetown University. The film was awarded both Crowd Choice and Third Place awards at the 2016 Voices from the Margins Film Fest, sponsored by America Media and the Ignatian Solidarity Network. 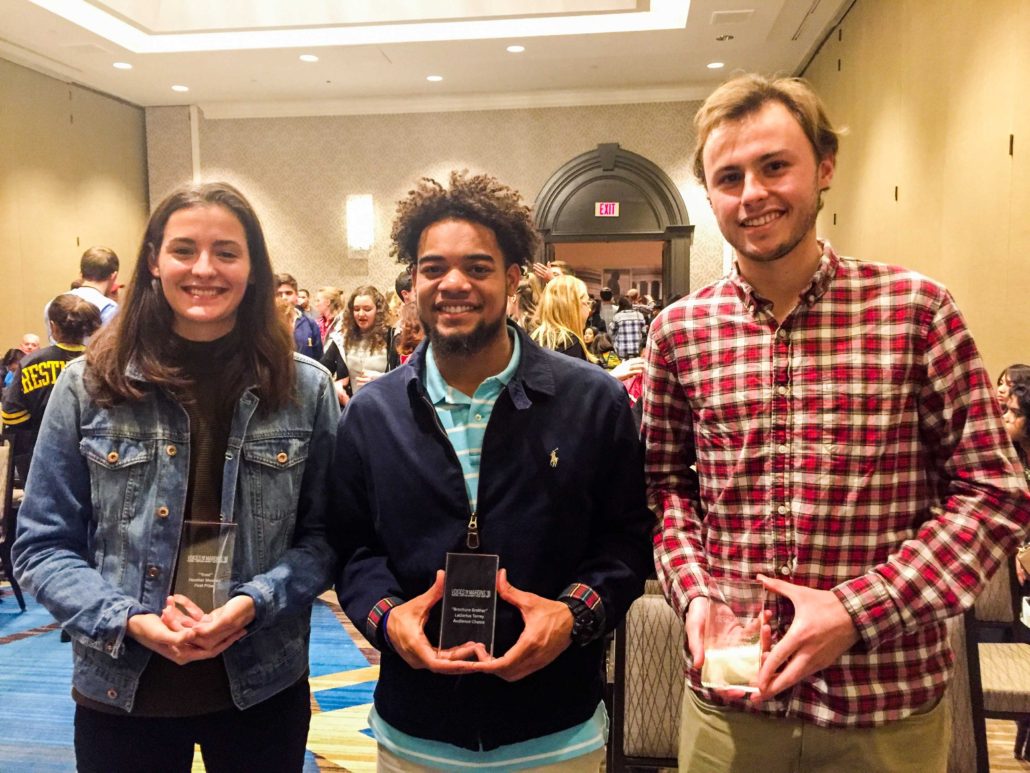 LaDarius Torrey and John Dodderidge with Heather Mooney, creator of the film Trust, at the 2016 Voices from the Margins Film Fest.

What individual experiences came into play as you decided to explore this topic through film?

LaDarius: For me, the topic and theme of Brochure Brother did not take much exploring–I’ve always considered myself a “Brochure Brother.” As a kid, I tested into my public school district’s gifted program in South Mississippi–not too common for black children growing up in a struggling single-parent household. In this program, I was quickly forced to face a certain reality–I was an “exception”, an outsider who constantly had to avoid tokenization and act as a voice for the black students who were never allowed into the space. From elementary to high school, the challenge of being the exception never left, so coming to Georgetown and dealing with the same issues around racial stereotyping and micro-aggressions was not as difficult for me as many of my other peers–coming from the backwards rhetoric of Mississippi, I had faced a lot worse.

John: I went to an all-boys Jesuit high school that a similar social climate to Georgetown. I guess I realized that my experience at these schools as a white student was far different than the experiences of students of color. I didn’t have to deal with as many unfairly tough situations everyday because I’m white. With Brochure Brother we wanted to put those disparities between college experiences to film and challenge how people think about the university environment.

Who are some of the individuals who were actors in the film? In what ways were they invested in the theme of Brochure Brother?

LaDarius: Emmanuel Muhammed, a housemate of mine and employee of John’s, was the main actor in Brochure Brother. As a member of the URBAN House [ed. U.R.B.A.N: Under-Represented Brothers from Across the Nation, a Magis Row independent living learning community at Georgetown University] working at a salad shop for The Corp (overwhelmingly majority white student-run on-campus business), Manny’s perspective and experience made it easy for him to invest in the theme–as the film portrays his life as well as many other tokenized black students on campuses such as Georgetown.

LaDarius: The story behind Brochure Brother is just as interesting as the film itself. As a freshman, I first heard Walter Kelly, an amazing spoken word artist, perform his original rendition of Brochure Brother and immediately fell in love with the piece. After Walter’s performance, I sought him out for help in creating my first on-campus film project, Am I Next–a project that addressed the dangerous mischaracterizations and micro-aggressions that black males faced on a daily basis at Predominantly White Institutions (PWI) after the killing of Michael Brown in Ferguson, MO. Am I Next was highly successful in sparking dialogues and teach-ins here on campus after being completed, and has received more than 10,000 views on Youtube.com as well as been mentioned in an UPWORTHY article. After the success of Am I Next my sophomore year, I knew that I had to create a project centered around Brochure Brother and finally got the opportunity when John and I were given an assignment to create a piece of our choice for our Introduction to Filmmaking class. I spoke to Walter about it the same day we were assigned the final, and two weeks later Brochure Brother, the film, was created. Within the film, Walter actually has a cameo as the Doppelganger who ignores the protagonist–which adds a bit of comedy to the piece to those who know Walter.

Were actors in Brochure Brother all current students? How did you balance schedules with such a quick turnaround time?

John: The whole shoot was generally so hectic. Everyone involved were students and so we had to find time to shoot in the midst of different class and exam schedules. We would grab the equipment and hurry to one location knock out a shot. Then, we would have to cross our fingers and hope everyone was able to film the next day. The craziness is what made the shoot so fun, though.

LaDarius: Through my first two years at Georgetown, I worked as a mentor and coordinator for the After School Kids (ASK) Program run through the Center for Social Justice Research, Teaching, and Service. This program centered on mentoring and teaching adjudicated youth in the city of DC in hopes of increasing their chances of staying off the streets, out of jail, and, ultimately, alive. Working with these teens and hearing their stories not only gave me the opportunity to connect with them on an intimate level, but also served as a call to action to create stories that 1) give the marginalized the agency to claim and share their own narratives, 2) challenge societal ignorances and disconnections, and 3) breed a sense of hope for a better tomorrow and progress. Beyond my experiences with the ASK Program, John and I, along with two other members in the Film and Media Studies Program, had the opportunity to spend a semester traveling over to Southeast DC to the FBR Teen Tech Center at the Boys & Girls Club to teach a group of 12 teens how to record and create their own short films. For me, this was an eye-opening experience that allowed me to put actions to my words.

John: Definitely working with the teens from the Boys & Girls club. It really solidified my belief that film is such a powerful and important medium. Seeing how empowered these kids felt by having a camera and telling their stories was very humbling. [“Teach a Kid to Film: Changing the Narrative”]

Working with these teens and hearing their stories …served as a call to action to create stories that give the marginalized the agency to claim and share their own narratives.

What do you hope viewers will take away from Brochure Brother?

John: I hope viewers will find the film moving. Whether that be because it captures their own college experience or because it helps them realize the daily challenges faced by students of color at a PWI. It would be great if people who see the film are inspired to go and advocate for change on campuses and stand in solidarity with other students. Ultimately, I think the film succeeds if it provokes people to discuss the content and share it.

Have you seen any small or significant impacts of your film on individual lives or on an institutional level?

LaDarius: Definitely. Brochure Brother has received an Audience Choice Award from a film showcase hosted by the university, and has generally increased the consciousness and awareness of many in the greater Georgetown community. Also, a number of university officials and administrators have seen the film and personally reached out to share their thoughts and encouragement to continue making thought-provoking pieces.

John: My sister teaches at a Cristo Rey school. They are now planning on using the film to help students at her school in the spring of their senior year prepare for college.

Why have you have chosen film as a storytelling medium?

LaDarius: Growing up, I always held a fascination with the influence of policy and those who crafted law, and really believed that one day I could become the first black governor of Mississippi. This quickly changed as I sat in government classes and listened to my peers, many deemed to be future leaders in this nation. I knew that my passion for filmmaking would allow me to establish a much larger voice, and, in turn, inspire many youth growing up in situations like mine and others who are viewed merely as statistics discussed and explicated in a classroom full of white Americans.

John: I’ve always had a fascination with film. When I was younger, I guess my interest was more in major blockbusters and action movies. Now, I’ve really become attracted to the idea of using film to tell stories that are not often told, to give representation to those not often represented on the big screen. I think films can change people’s worldviews, and I really want to pursue that.

LaDarius Torrey is  from the beautiful Mississippi Gulf Coast, and is a senior at Georgetown University majoring in Government with minors in African American Studies and Film & Media Studies. LaDarius has aspirations of one day making films as a writer and director.

John Dodderidge is a Georgetown University senior from Philadelphia, majoring in English and minoring in Film and Media Studies. He currently operates a student-run salad and smoothie restaurant on Georgetown’s campus called The Hilltoss. After graduation, John hopes to pursue a career writing and directing in the film industry. 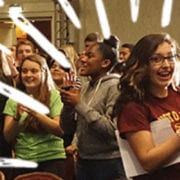 Advent(ures) in Waiting
Scroll to top
Shares
Share This