Blog - Latest News
You are here: Home1 / Voices for Justice2 / Discerning Deacons: An Interview with Co-Directors Casey Stanton and Ellie...

ISN spoke with Casey Stanton and Ellie Hidalgo, co-directors of Discerning Deacons, a project launched in April 2021 committed to engaging Catholics in the active discernment of the Church about women and the diaconate.

In 2020, following the Synod of Bishops on the Amazon, where a majority of bishops were in favor of ordaining women as deacons, and where the Synod formally requested to share their “experiences and reflections” with a papal commission, Pope Francis established a new commission that will begin meeting in Fall 2021. Discerning Deacons’ current work is supporting educational opportunities and conversations in parishes and communities so that everyone can participate in the discernment. Discerning Deacons will bring the fruits of this discernment and conversations taking place across the country throughout summer 2021 directly to Pope Francis and members of the papal commission in October 2021.

The following is an edited version of ISN’s conversation with Casey and Ellie.

ISN: Can you tell us the story of forming Discerning Deacons? 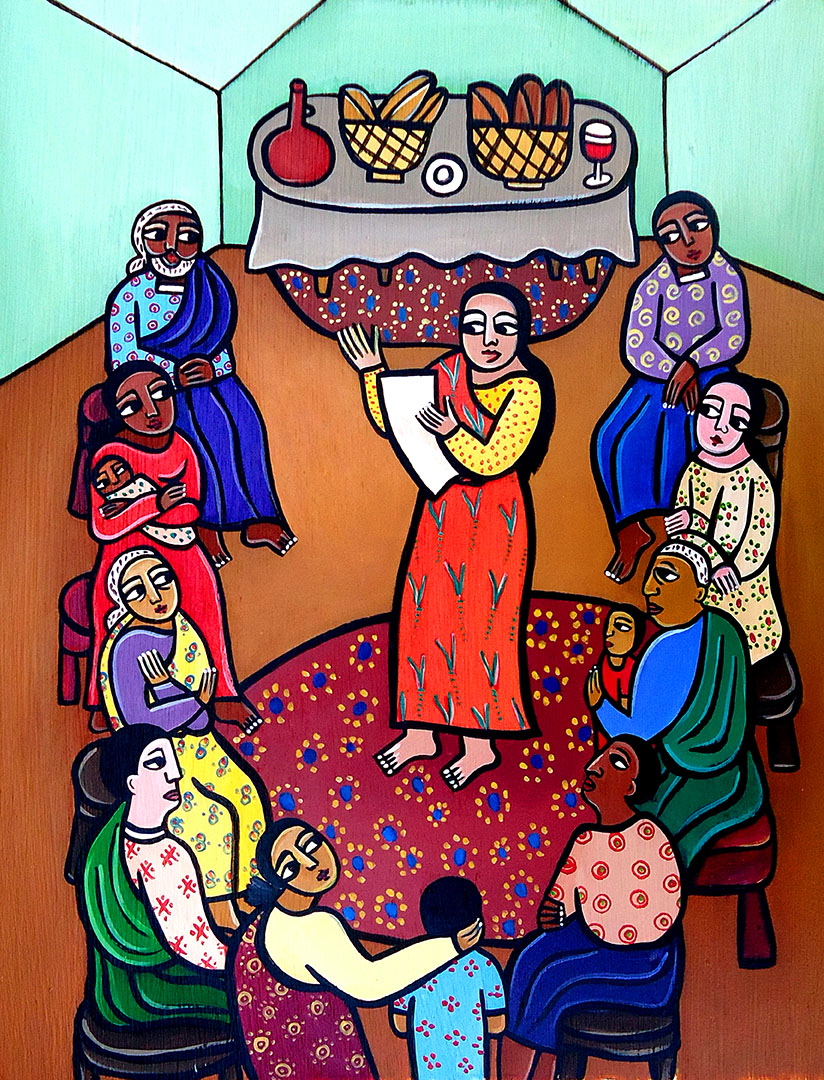 Casey: In the early part of the pandemic, Luke Hansen and I held a virtual workshop called “Discern, Dream & Scheme.” The whole world was upside down, including our liturgical practice and life in the Church. What if the Holy Spirit was doing a new thing inside of this crisis?

Ellie was one of the nearly 50 people who said yes to the invitation. She was in the thick of grieving the sudden death of her youngest brother in March, and discerning whether it was time to move closer to family in Miami. This would mean leaving a place she had come to love deeply, Dolores Mission Church in Los Angeles and the vibrant ministry there. It was a moment of discernment.

This is the origin story of Discerning Deacons. We didn’t begin with the diaconate. We began with discernment. With listening. With telling our stories, reflecting on our experiences, noticing the movement of the Spirit across our lives and into the present moment.

And we dared to dream.

A number of women in the workshop, with bated breath, had been following the unfolding conversation about women and the diaconate. They had read Dr. Phyllis Zagano’s books or participated in her educational webinars. They knew Pope Francis had decided to form another papal commission to discern the question about women and the diaconate. He had opened up the conversation once again.

So a group emerged to plan a virtual prayer service for the Feast of St. Phoebe on September 3, 2020. Women from the workshop prepared to share their own testimony of the ways they have navigated a call to serve, to preach, to minister—in campus ministry, in chaplaincy, as doctors and retreat leaders, as lay ecclesial leaders in their dioceses. And we sought the intercession of St. Phoebe for the Church’s discernment of women deacons and the papal commission formed to study the topic.

Ellie: Three months later, I joined the team to shepherd the next “Discern, Dream & Scheme” workshop during Advent.

Then, a few days before Christmas, we were invited to dream bigger than we had thought to dream. A person asked for our hopes for supporting the Church’s discernment around women and the diaconate—and what resources we would need.

So together, we turned from discerning and dreaming—to scheming. To writing a vision and making it plain. What if there could be a way to actively participate in the Church’s discernment? How could we do that without being pushed into ideological camps and reinforcing divisions? How can we stay grounded in our stories, our love of the Church and our fidelity to the tradition and to the Holy Spirit?

ISN: Why you in this moment?

Ellie: Among the co-directors and a deputy director of engagement (Lisa Amman), we have more than 50 years of experience engaged in ministry in Catholic churches and organizations at varying points in our lives as a teacher, journalist, chaplain, campus minister, pastoral associate, social justice advocate and adult faith formator.

The diaconate speaks to our own vocational desires to proclaim the Gospel and to help move our faith out into the world. It speaks to our desire to help our daughters and nieces to belong to a Church that recognizes and values their voices, so that children never again experience our faith as “just about the boys,” as Lisa’s daughter declared when she was six years old.

Each of us has been inspired by the work happening in the Amazon where the bishops and laity formed an ecclesial network to consult broadly with their people and to listen to the hopes, dreams, concerns and needs of the people. More than 87,000 men, women, clergy, laity, urban, rural, indigenous people were consulted, with 90 percent of the region’s bishops participating in these listening sessions. With this kind of consultative process, the issue of women’s leadership in the Church emerged as a priority issue for Amazon Church.

ISN: Discerning Deacons boasts an impressive lineup of endorsers and advisors? How did these people connect with this work?

Casey: Relationships. We did a lot of listening. We were surprised, sometimes, that people would open up to share their own stories and hopes around what it could mean for women to be able to serve as deacons. And we realized we needed a way for people to publicly express these hopes—to publicly express their prayers and their encouragement for the Church’s discernment.

Ellie: We wanted to reach out and listen to those who have paved the way. We thought it was important to listen to deacons, especially deacons who are committed to growing and informing the wider public on the vocation of the deacon.

We wanted counsel from a bishop, so we could stay connected to the Church’s pastors.

We wanted to honor those who have been leading this dialogue—to seek their blessing, even as we try to grow the conversation and engage new people in the discernment.

Casey: We know we are out on a bit of a limb. We weren’t hired by the U.S. Catholic bishops to run a formal process. But we also know that what we are doing is well within the tradition and boundaries of our institutional church. We are living a question; we aren’t demanding an answer.

We are serving a process—boldly, courageously and with conviction, but also knowing that ultimately this is a decision that is bigger than us—and that we do not have the whole picture in view.

ISN: Can you share stories that illustrates the lived reality of why this project is important?

Casey: In April, we conducted nearly 40 interviews with women in ministry in the U.S. today. We heard profound stories of faithful commitment to serve the Church.

One story that strikes me is from a woman who had been formed by a religious community and ultimately discerned a vocation to marriage. While raising her children, she served in her local parish in multiple “quarter-time” positions—doing catechesis, sacramental formation, ministry at the school. She was dedicated, even as she was underpaid.

Recently a new priest arrived in her parish. She broke into tears recalling the impact it has had on her: he has no interest in her experience or wisdom, he ignores her formation in theology and ministry, he comes in claiming he knows best, largely sidelining her voice. Every day she lives with this pain of not really being seen in the place she has served for decades.

We think this suffering can be alleviated by recognizing women’s gifts, listening to their stories of call, of discernment—and receiving them in the Lord—in Jesus’ name and as called by Jesus to serve the Church formally as a deacon. This could have a tremendous ripple for our Church.

Ellie: One woman told a painful story of accompanying her sister to meet with a priest for spiritual support after her sister experienced a miscarriage. They met a busy priest who prayed a few rote prayers over her and sent her on her way. Her sister left the Catholic Church after this experience, because the priest did not have the pastoral capacity to attend to her with the pastoral awareness and care she needed.

I feel empathy for priests who are stretched beyond their capacity. What if our model of Church leadership was deeply collaborative and fully embraced women’s gifts—particularly to attend to women’s distinct pastoral needs. Imagine if the priest had been able to call upon a woman deacon whom the parishioner could meet with to discuss the experience of her miscarriage. Instead, there is a lot of silent suffering. Some are simply walking away and seeking belonging or care outside the Church. Women called, formed, and ordained as deacons could be a fruitful response to the urgent needs of the people of God to be cared for, to be fed, and to feel seen as part of the Church community.

Join with Discerning Deacons by subscribing to their newsletter—and save the date for the upcoming virtual liturgy to celebrate the Feast of St. Phoebe, diakonia, on September 3rd at 7pm.